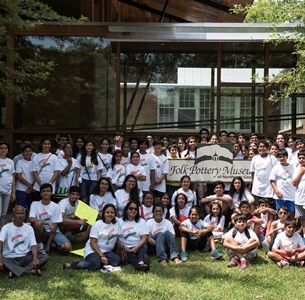 Balvihar Hindi School, an educational program of the World Hindu Council of America (VHPA), Atlanta, concluded its 12 day (weekdays, July 8-23, 2015) STARTALK Summer Hindi Language Camp. The camp was inaugurated by the Consul General Nagesh Singh, and Consul R. Srinivasan. This is Balvihar’s fifth year receiving federal funds through a highly competitive vetting process, and the team has been awarded the grant every time they have applied for it. The camp teaches Hindi language through fun activities that create opportunities for students to speak the language while interacting with their peers. Teachers are trained to design lessons to keep the students active, engaged, and interested. Students are in middle and high school; knowledge of Hindi or Indian origin is not required.

Language and culture are closely intertwined; learning one without the other is less effective. This camp uses both. This year’s theme was “Incredible Eco-friendly India.” Campers explored eco-friendly traditions, arts, and crafts of India, and innovations in technology that reduce pollution and utilize renewable resources. Students made “virtual” trips to four different states of India, using newly acquired information to complete in-class activities that included language games, debates, and discussions on social and environmental issues. There were also clubs, sports, and yoga sessions. In the Craft Club they created art work using natural materials. In the Environmental Science Club the students had the choice to make a house or a houseboat with recycled material and install solar panels for lighting. In the Culinary Arts Club they made delicious, healthy snacks: chai masala, mango lassi, neebu ka sharbat, and for sprouted moong daal chaat, they went through the entire process of soaking, sprouting, and making the chaat. Kids had fun grinding spices with mortar and pestle and cutting onions and tomatoes with plastic knives, and happily tucking into the food they prepared. Learning by doing introduced campers to a lot of practical Hindi used around the house and in the kitchen. Another club that had students really practice their Hindi speaking was the Daily News Club. Each day, a different group of students interviewed the rest about the day’s activities; what they did, what they liked or disliked and why. These interviews were recorded and played as morning news during breakfast the next day.

The first destination was Orissa, with the Rath Yatra and the “largest kitchen in the world” where more than 500 chefs prepare mahaprasad for devotees—prepared in earthen pots and served in eco-friendly pattals and donas (plates and bowls) made from leaves. The kids were shown how these plates and bowls were manufactured at a large scale. Orissa is famous for art forms like patta-chitra and pipili work. The patta-chitra uses almost all plant-based ingredients for the medium as well as the colors. After the virtual visit came the hands-on, making pattals and donas with leaves and making patta-chitra and pipili-work. It was a great sight to see the boys and girls carefully learning to thread the needle and sew one piece of cloth on another for the pipili work.

Next stop was Uttar Pradesh, with the legend behind the Maha Kumbh Mela. Kids explored the tent city for pilgrims in the holy city of Prayag. While the novice language learners learnt vocabulary, more proficient speakers discussed eco-friendly arrangements for the pilgrims and came up with suggestions on reducing pollution of the city and the Ganga River during this mammoth gathering. Campers also learnt about using suraahii and matka for cooling water; since the curriculum includes STEM, students were explained the process of cooling water in earthen pots, using scientific terms in Hindi. The bangle industry in Firozabad is famous, so bangle measures were used as a fun way to introduce Hindi numbers and measurement terms. Children learnt about the difficulties faced by workers in the bangle industry and discussed ways to improve their standard of living. On a field trip to the Folk Pottery Museum of Northeast Georgia, they learned about making pottery and tried making flowers and other objects with clay.

The virtual tour moved to Rajasthaan and the Teej celebrations.Campers learned about the desert climate and culture, enjoyed wearing the traditional pagadii, and greeted everyone with an enthusiastic “Ghani Khamma” for the next few days! Mehndi is an integral part of Teej, so kids learned the decorative as well as medicinal benefits of the mehndi plant. They compared mehndi with modern tattooing: in a lively and hilarious debate, they role played as teenagers and parents, teenagers arguing with parents about getting a tattoo, and parents trying to convince them about the benefits of the herbal henna. The kids collaborated, came up with arguments, and tried their best to get their point across, all in Hindi and without any prompting from an adult! They also learnt about the camel cart. They made greeting cards using authentic block printing and fresh vegetable colors made from ground beetroot, spinach, turmeric, etc. They explored the region’s upcoming solar energy industry, saw how solar water-pumps have brought prosperity to the villages and reduced pollution from diesel pumps, and then wrote and presented a skit promoting the use of solar water-pumps. These activities helped improve both writing and presentational speaking. 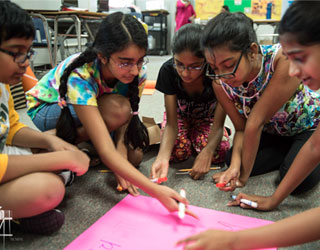 Last stop was Kerala, “God’s Own Country,” with traditional welcoming ceremony, landscape, houseboats (made of natural materials and powered by the sun), hills, forests, and beaches. Campers were shown the spice farms of Munnar and given samples of spices. They were shown the process of making tea-powder. Learning about medical tourism, they were introduced to Ayurveda and compared traditional and modern medical practices. They made an herbal face pack for their moms and packed it in eco-friendly packaging, with ingredients, directions for use, and their own brand name! They came up with slogans and posters promoting their products.

On the last day, all participated in a cultural show with beautiful dances and plays written and directed by students. Throughout the camp, the teachers and teaching assistants (TAs) acted as facilitators rather than leaders. The cultural show was a testimony of the success of this strategy, since the students were very vocal on stage and quite spontaneous! The show was enjoyed by participants and family members. Camp concluded with an exhibition of projects made by students. Chai-masala from the Culinary Art club added special flavor to the afternoon tea.

Using “Total Immersion” creates an environment of the target language and culture, so that the learner absorbs the language in the classroom, at mealtime, everywhere. All was in Hindi—newspaper articles, calendars, maps, signs—or like in India—sports like kabaddi, teachers’ traditional Indian attire, lunch from different regions of India catered by restaurants Mumbai Masala, Kerala Kitchen, Chinese Dhaba, and Curry in a Hurry.

Young college grads working as TAs were great role models for the students. Under the leadership of camp director Manju Tiwari, food coordinator Sneha Mehta, and with support of VHPA Atlanta Chapter President Kusum Khurana, the camp earned an “Outstanding” rating from the federal team of observers. Likewise, feedback from parents and kids was overwhelmingly positive.