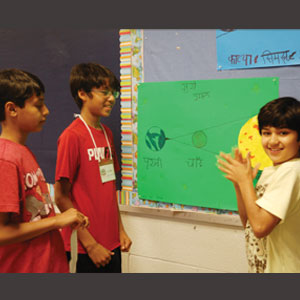 Balvihar Hindi School Atlanta (of Vishwa Hindu Parishad of America) once again conducted the increasingly popular StarTalk Hindi Camp, making it the third camp in as many years. The camp is part of a foreign language initiative, StarTalk, conceived and funded by the federal government, and operates on their guidelines. The ten-day June camp at Berkmar High School was a huge success, getting rave reviews from students, parents, and StarTalk officials alike, with the theme “Discover India.”

The purpose of the camp is to teach Hindi language to children in grades 5-12. The main focus is on oral proficiency, along with writing. Students ranged from non-Hindi speakers to those who could read and write the language and were accordingly assigned to different groups. The objective was to improve the students’ language proficiency by one or two levels by the end of the ten day period.

A new initiative taken this year under the able direction of Mrs. Manju Tiwari was to introduce science, technology, engineering, and math (STEM) in the camp. The curriculum connected these fields with the festivals, food, games, music, and dances of India, resulting in a multipronged learning experience, with language, science, and culture lessons intertwined. A typical day’s schedule included 30 minutes of yoga, two classroom sessions, an hour of computer lab, and a hands-on science lab or prayogshala. Activity-based lessons made learning fun. The day ended with outdoor sports like kabaddi and soccer. A wholesome breakfast, lunch, and two snacks kept the kids well fed and represented the diverse cuisine of India. 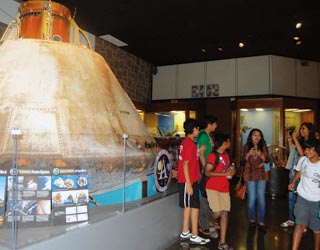 The next two days were devoted to Indian festivals, and the folk tales and astrological facts behind them, e.g., kumbh mela, solar and lunar eclipse, the solar system, contribution of Aryabhatt, and the engineering behind the pushpak viman.

This was followed by two days of learning about Ayurveda and its impact on Indian cuisine and eating habits. The students made the food pyramid with Indian foods and got to make butter (makkhan) from cream the old fashioned way, learning the chemistry and physics behind butter making.

Indoor and outdoor Indian games were covered with their history, and the math and science behind them. The kids got to make their own card games, snakes and ladder board game, sling shot, and bow and arrow. They even created a modern version of Arjuna’s piercing the eye of the fish while looking at its reflection.

The last unit was Indian music and dance: ragas, musical instruments, dances, and mudras. Through this the students learned about the intimate relation between environment and music and dance, and the Indian custom of respecting nature. They also learned about various types of pollution and the importance of recycling, and made musical instruments like jal tarang and dholak from recycled material.

The last day was devoted to assessing the students’ progress and presenting the work created, in the form of a science fair. Parents were invited, and students could show their work as well as their proficiency in expressing scientific facts in Hindi. Finally came a cultural show with skits, songs, and dances, to an almost full auditorium. All students who successfully completed the camp were awarded certificates.

The feedback received was overwhelmingly positive with comments like “My son has been speaking Hindi a lot” and “My daughter really enjoyed the camp and wants to come back next year.” The Hindi movies screened during the lunch hour were popular, as were the dance sessions on Hindi film songs. The food was greatly appreciated; “Mom they cook better than you” was one quote heard loud and clear!! The sports, especially kabaddi and ultimate Frisbee, were hugely popular, too. The teachers and teaching assistants were well liked. Incorporating fun with meaningful learning was challenging, yet fully achieved. Students learned a lot of new things without being overwhelmed by a rigorous, academics-only schedule. The StarTalk team is enthusiastic about future camps.

Videos (from a previous year, for the flavor of the camp):
Startalk Balvihar Atlanta Hindi Language and Culture Camp July 2011 Day 7