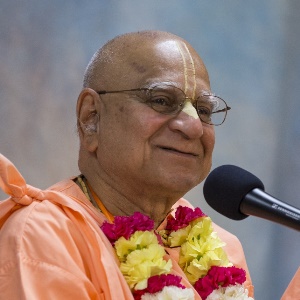 Gaudiya Vaishnava Association (GVA), a spiritual organization of the Brahma Madhva Gaudiya Sampradaya, has been active in Atlanta for more than two decades. The sole objective of GVA is to propagate, preach, and promote Love of God and to chant His holy names, the means of deliverance for this age of quarrel and hypocrisy. GVA was started by His Divine Grace Shrila Bhakti Swarup Tirtha Goswami Maharaj. GVA organizes programs throughout the year to propagate the esoteric message of the Shrimad Bhagavad Gita and Shrimad Bhagavatam.

This year was no different. His Divine Grace Shrila Bhakti Swarup Tirtha Goswami Maharaj, during his tour, visited Atlanta and gave lectures on the Shrimad Bhagavatam between July 15 to August 18, 2019 at the new GVA Center, 4040 Old Milton Parkway, Alpharetta, GA from the 7th and 11th Cantos, and covered the pastimes of the demon king Hiranyakasipu and his devotee son, Shri Prahlad Maharaja, and conversation between Lord Shri Krishna and Shri Uddhava widely known as “Uddhava Gita.”

The Science of God is explained in Canto 7. In particular it contains the narration of Shri Prahlad Maharaj and his father the demon king, Hiranyakashipu. Hiranyakashipu means Gold and Bed, which stands for material enjoyment. Hiranyakashipu after getting a boon from Lord Brahma, the cosmic creator, became almost invincible and terrorized the whole universe. He had a son, named Prahlad, who was a staunch devotee of Lord Krishna. Shri Prahlad Maharaj was taught by two teachers Sanda and Amarka who were interested to educate him in politics, but he was not interested. In school, he preached Bhagavata Dharma, devotional service to Lord Hari, and advised his schoolmates what he learned whilst in the womb of his mother from Narada Rishi. Shrila Maharaj recited the prayers that Prahlad Maharaj offered to Lord Narasimhadeva in order to pacify Him after killing Hiranyakashipu. He elaborately explained about the best among exalted devotees, the four social classes, the four spiritual classes, how a perfect person behaves, what ideal family life is, and the instructions for civilized human beings. Shrila Maharaj also described in great detail the four social classes known as varnasrama dharma (socio-religious institution), the regulative principles to be followed by brahmacharis (students) and sannyasis (renunciants), and the occupational duties of grihastas (householders) and vanaprasthas (retired ones).

The perfection of spiritual knowledge was explained from the 11th Canto, wherein Lord Shri Krishna instructs Uddhava that “One who is actually wise, who knows the truth of the self and possesses transcendental insight, rejects this world of dualities and the so-called knowledge meant for facilitating enjoyment of it. He instead engages himself in trying to satisfy Me, the Supreme Personality of Godhead. This is pure bhakti yoga.” The glory of pure devotional service is that it surpasses knowledge and detachment, which was explained based on the processes of karma yoga, jnana yoga, and bhakti yoga. Underscoring the Vedic path, Shrila Maharaj explained how, for those who are perfect in knowledge and devotion to the Lord, there are no materially good qualities or faults. He impressed that the Vedas focus exclusively upon Lord Shri Krishna, and this material world is simply the illusory energy of the Supreme Lord. Shrila Maharaj as part of the concluding section, explained the cause and the elements of material creation. 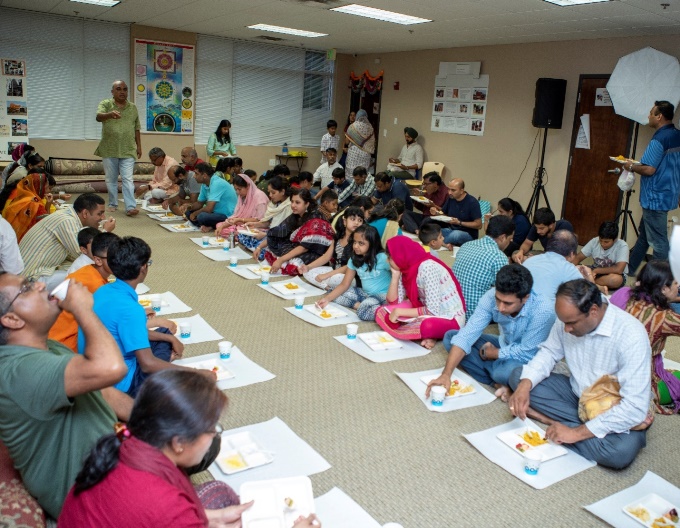 Prasad served after each program.

On the final day of the discourse, GVA Gurukul students recited shlokas from Shrimad Bhagavat Gita, sang beautiful bhajans, danced to soul stirring songs, and received certificates of participation from Shrila Maharaj. GVA Gurukul, under the guidance of Shrila Maharaj, teaches children from 5 years to 15 years of age the value of devotional service to God (Bhakti Yoga) and inculcates the Vedic way of life. This enables the student to love nature and other living entities through service to God. The students develop spiritual strength to handle tough situations and stress in their day-to-day activities. 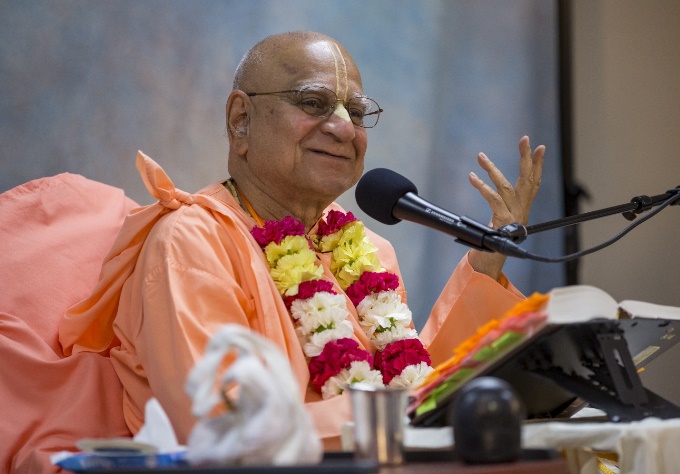 Genuine spiritual seekers and devotees from St. Louis, Washington D.C., Phoenix, Houston, Dallas, Seattle, and Connecticut traveled to Atlanta and attended the sessions. Krishna prasad was served after each program. Shrila Maharaj introduced Hari Nama sankirtan to travelers at the airport before departing from Atlanta to continue his tour in Europe.