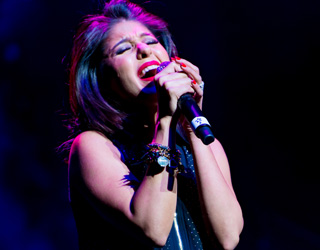 The much anticipated Sunidhi Chauhan concert, efficiently organized as usual by GAPI/AAPI in September, saw attendees swarming in punctually into the Cobb Energy Center. The excitement was palpable, pumped up by a flawless, crisp sound system and a stage screen back wall running the popular singer’s videos in the background.

The first singer of the evening was Nalini Krishnaji from Boston, the winner of the first season of Voice India. A classically trained talent, she sang to absolute perfection. Next to romp on stage was Rakesh Meni, the first runner-up from the fifth season of Indian Idol. He opened with the popular Rahat Fateh Ali Khan number Mein tenu samjhava ki followed by a few current hits.

Then it was time for the star of the evening. Sunidhi stepped on to the center stage to a rousing welcome, dressed in bright yellow and black. She opened her performance with the hugely popular title song of Dhoom, quickly followed by billboard favorites like Dance pe chance maar le, Mera ishq sufiana, Teri ho gayee sajna, Aaj gali se jab koi guzre, Mahiya and Desi girl.

Energized and effervescent as ever in the second half of the show, Sunidhi delighted the audience with some golden oldies, after which she ventured on to Pia more and Mehboob mere. Before the finale, Sunidhi introduced her accompanying musicians, the national promoters, Balaji Entertainment, and local promoter Rahim Paracha of Paracha Entertainment, besides the concert conveners. The conveners delightedly informed the gathering that they had not only met but exceeded their goal for the fundraiser.

Such was the engagement between Sunidhi and the audience that she found herself unable to leave the stage! But all good things must end and Sunidhi concluded her performance with “something very special tonight” for her fans including Disco deewane, Hua chokra jawan re, Tere liye hi toh signal tod tad ke, Sheela ki jawani and a couple more of her ever popular numbers.

This memorable concert was organized by the Georgia Association of Physicians of Indian Heritage (GAPI) to raise awareness for breast, colon and ovarian cancer. The proceeds from the concert will be distributed to the various cancer programs in Georgia to help educate, fund, research, treat, and cure these cancers. The day before the concert, the conveners had organized a whole day conference at the Wyndham in Cobb County to educate attendees of the growing menace of cancer and the state of current progress with scientific research.​

Conveners Dr. Naresh Parikh and Dr. Indran Indrkrishnan organized a felicitation dinner for Sunidhi and her troupe at Mirch Virchi restaurant on the following evening. Sunidhi and her team members mingled with the guests in a relaxed atmosphere, and wholeheartedly appreciated the hospitality offered by the Atlanta Indian community.