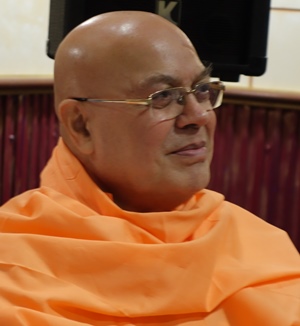 Pujya Swami Adhyatmanandaji, President of Sivananda Ashram, Ahmedabad, India, visited Atlanta for several days in June 2015. A communicator with a great sense of storytelling and humor, he lectured on yoga and Vedanta at several venues. At a meeting of the Rotary Club of Emory – Druid Hills held in Ashiana Restaurant in Global Mall, he spoke on “Chanakya for Strategy and Decision Making.” 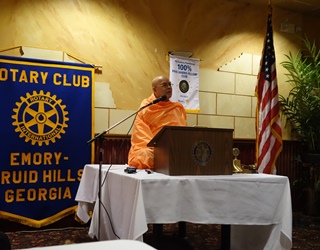 Swami Adhyatmananda speaking to Rotarians at Global Mall about the qualities of a leader. (Photo: Suzanne Sen)

Dr. Ravi Sarma introduced Swamiji, saying that it has become a tradition here to hear him lecture, as he radiates love, peace, and happiness. The swami introduced Chanakya (350-275 BCE), a teacher of economics and political science and a royal advisor, educated in what is now Pakistan. He was instrumental in helping to unite most of the Indian subcontinent into the Maurya Empire. The swami described the moral lessons that Chanakya gave the king: that a king’s duty is to think of others and fulfill the desires of his subjects, to have self-control before controlling others, to walk behind to care for those in front, to be humble and serve respected ones, to be honest, to see everyone as equals, to be merciful and kind. The swami took questions after his talk and offered a book and a CD of yoga asanas for sale.