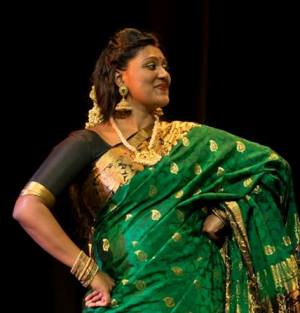 Neelambari (the group named after a raga) was founded in 2002 by a few like-minded families with an objective of practicing, appreciating music, and cultivating musical interest among children of Indian origin. This group provides valuable encouragement and opportunity to our young and upcoming talents, apart from facilitating high quality performance from accomplished singers and dancers among us. 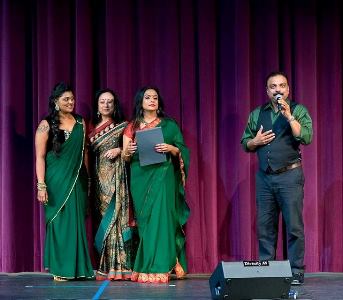 “Swar Tarang” is a unique concept, conceived by this group to bring to Indian music aficionados a mesmerizing evening showcasing at least ten distinct genres of Indian music and to demonstrate how they have influenced popular Indian music. 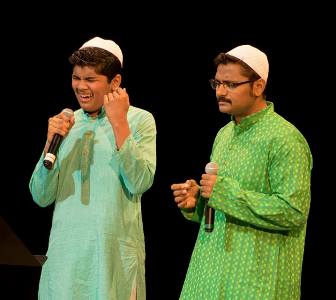 The evening, on February 10, 2018 at Duluth High School, was kicked off promptly as scheduled and started with the Carnatic genre. This was followed by devotional music from the three main religions of India. The little kids of Neelambari presented an exhilarating dance to a Bollywood medley and had everyone on their feet. The singers came back on stage to regale the audience with folk songs from various parts of the country. This included Baul music, Rajasthani, Tamil, and Malayalam folk songs.

"Dance The Rain," titled from the quote, "Life isn't about waiting for the sun to shine, it's about learning to dance in the rain." (Photo: Venkat Kuttua)

The next dance segment was a semiclassical piece, incorporating the three dance forms of Bharatanatyam, Mohiniattam, and Kathak, and thus challenged the dancers as they switched between these three styles. “Dance the Rain” was an evocative piece about the desire to face the challenges of life rather than hide from them.

Next the Hindustani singers took the stage, to showcase some well-known ragas from this genre. A very interesting presentation of a Hindustani medley was showcased later, with morning, afternoon, evening, and night ragas. The genre also included some gems like “Albela Sajan,” a well-known Malayalee Qawalli Mehruba among others. Before the dinner break, we got to hear the artists render some songs from the new genre, which shifts radically from the conventional music of India.

Post dinner we were treated to music from the east, Bengali Rabindra sangeet. This was followed by a very authentic presentation of Sopana sangeetam of Kerala. We were regaled by the very energetic Goan dulpod and some popular songs from the Bollywood genre. Before concluding the music segment, we were treated to some gems from the patriotic genre as well. The second half of the program was interspersed with a high-octane performance by the teens of Neelambari. The finale dance was a blockbuster as well with a medley of dances performed with high energy by the members of Neel family. 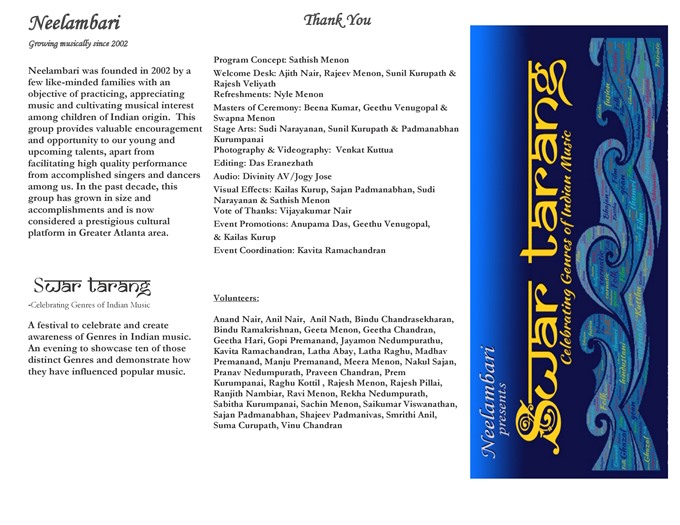 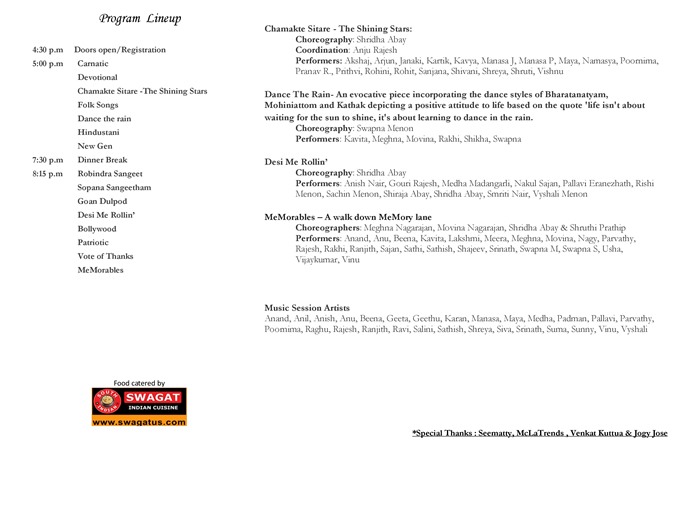