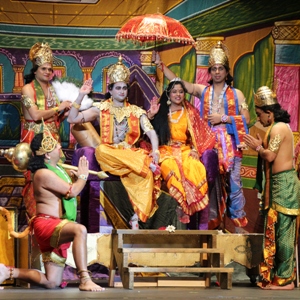 The Ferst Center for the Arts at Georgia Tech was shrouded in a grey mist on November 17, a fall Sunday afternoon, almost as if the Gods had ordered the perfect monotone backdrop for the rich hued and jewel toned costumery on resplendent display inside the auditorium. It was time for Syam Yellamraju’s annual theater production. This year's feature was the Ramayana. Proceeds from the play (with tickets priced at $25 each), benefited the North American Shirdi Sai Temple of Atlanta.

The greater Atlanta Indian community showed up in great numbers to support the charitable cause. The colors on stage competed with the audience’s post-Diwali sartorial finest, bright purple saris bordered with even brighter gold and teal salwars graced with silver tassels. 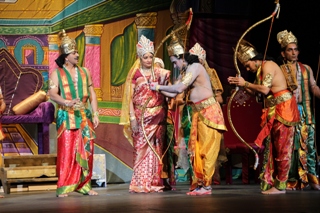 The play was presented in nine scenes, each highlighting one major story in Valmiki’s Ramayana. One of the high points of the production was the background music which was full of surprising elements. The choice of music for Sita’s swayamvar at King Janaka’s court was lighthearted, with a comedic element that was well-appreciated. Set and costume designs stood out for their attention to detail. The horse-drawn chariots in the war scenes were beautifully crafted and significantly enhanced the production value.

Vaali is slayed by Ram, as Sugreev (second from left) looks on. (Photo: Girija Sankar)

Strong performances by Madhav Durbha (Ram), Ashwini Dhole (Sita), Ajay Viswanathan (Dasaratha), Rajesh Krishnan (Sugreev), and Anand Date (Lakshmanan) compensated for the seeming amateurishness of some of the others. The fight sequence between Vaali and Sugreev in scene 6 is worthy of mention and was choreographed well. Sumanth (played by Sam Prasadh with a certain panache that we will now believe as Sumanth’s very own), an advisor in Dasaratha’s court, was an audience favorite and generated much applause, though some of it was unintentional and for slight wardrobe malfunctions.

At 3.5 hours though, the play wore down even the most ardent of Ramayana fans. Long pauses between scenes could have been substituted with an intermission. A cast of more than 45 and a production crew of more than 25 ensured that the play, though long, went off without too many hitches--all the more remarkable considering the entire cast and crew were volunteers.

In the end, Ramayana the play provided wholesome family entertainment and reminded us once again of the timelessness of our great Indian epics.