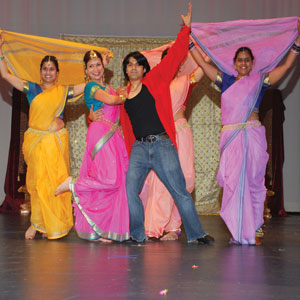 Taal School of Dance presented its 2nd Annual Dance Recital on May 22nd at North Gwinnett High School attended by an enthusiastic audience that filled the auditorium. Thunderous applause after each performance and a standing ovation at the conclusion proved its success.

The mood for the evening was set by an invocation of Lord Krishna and Guru Vandana rendered with devotion by the advanced team of students. Director and choreographer Divya Srivastava arranged a selection of technical Kathak pieces demonstrated by the students, showing the prowess they have attained to earn their 1st and 2nd year certificates. The Kathak bols were recorded by Divya and Pankaj in their own studio. Each technical piece was followed by a dance based on classic Kathak moves.

A Thumari executed gracefully by Divya herself was the perfect segue to the mellifluous vocal performances by Pankaj Bhargava and Vandana Upadhyaya. Their duet ‘Tu Jo Mere Sur Mein’ left the audience mesmerized, but the versatile Pankaj Bhargava, popularly known as the Kishore Kumar of Atlanta, broke the spell and soon had Taal dancers as well as the audience swaying to the song, ‘Tere Naina Tere Naina.’

Now ready for some rocking, the program entered the Bollywood segment. These numbers showcased students in shiny costumes adorably shaking their pom poms to ‘Zubi Dubi’ and performing to latest hits like ‘Ainvayi Ainvayi’ and ‘Gal Meethi Meethi Bol.’ A Marathi folk fusion ‘Aika Dajiba’ in colorful traditional ‘Lavni’ sarees by the advanced group along with Divya and Rahim Hussain had the audience calling for an encore. A couples’ dance to the song ‘Rut Aa Gayi Re’ left most in the audience imagining themselves dancing on the stage, which had been brightened with decoration by Varsha Shah.

Emcees Navin Tyagi, an active theater artist and founder member of Sargam music group, and his wife Dr. Prabha Tyagi, a physician and music and dance patron, kept the audience engaged and entertained with the informative script and interactive style of narration. Trophies were distributed to all the students. Ms. Divya also awarded medals to the Students of the Year 2010-2011, who scored first positions in the Kathak examinations. One comment from the audience was “Divya’s energy is contagious, inspiring and motivating.”