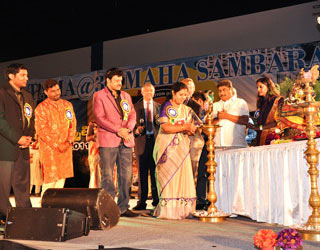 The Telugu Association of Metro Atlanta (TAMA) celebrated its 30th anniversary, “TAMA@30 Maha Sambaralu,” with gusto. Attendees lined up early in the morning at the Georgia International Convention Center on Saturday, July 9, for a Kids Fest, cultural programs, seminars, souvenirs, booths, food and Tollywood presentation that lasted till midnight for an audience of 3000. The grand finale showcased the Telugu language, literature, folk songs, village dances, culture and heritage.

Dr. Daggubati Purandeswari, Minister of State for Human Resource Development, Government of India, was the chief guest. A host of other dignitaries from India also attended, including Modugula Venugopala Reddy, member of Lok Sabha; three MLAs, Dhulipalla Narendra Kumar, Sandra Venkata Veeraiah, and Yarapatineni Srinivasa Rao; B.V. Raghavulu, State Secretary of CPI (M); and a host of representatives from different political parties. All these political leaders participated in a “political forum” to explain the happenings in Andhra Pradesh to a packed audience. They also answered questions from the audience.

More than 15 seminars/workshops were held simultaneously on a variety of subjects. Other programs included the rare and extraordinary Telugu literary multitasking feat of ashtavadhanam by guest artist Medasani Mohan, yoga sessions by Dr. Srikrishna Chandaka, cultural activities, dance, drama, and more. Attendees commented that arrangements were at the level of those of national associations. More than 60 vendor booths put up their stalls.

The banquet held the evening before at Forsyth Conference Center was well attended by more than 500 community members. A host of VIPs from Andhra Pradesh were also present, as well as Dr. Purandeswari, GOI minister, and Balakrishna, popular Telugu cine hero (both are children of NTR—Nandamuri Taraka RamaRao). The Atlanta community raised a donation of more than $20,000 for Basavatarakam Indo-American Cancer Hospital & Research Institute in Hyderabad, which had been established in memory of NTR’s first wife. The amount was presented to Balakrishna, president of the hospital named for his late mother.

Deadline: 16th of each month—for consideration in the following month. However, chances of inclusion are better if reports are received well in advance of the deadline.