TAMA promotes prevention, early detection for those who need help with health care 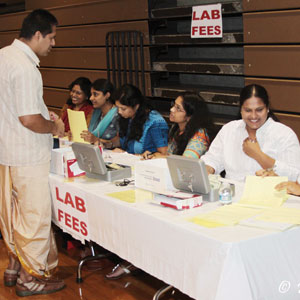 While this is the 29th SAI Health Fair, it is worth noting that interest is not lagging. Over 600 people attended, many lining up from 7am. Few people realize the invaluable help these health fairs are providing to the uninsured, underinsured, seniors, and elderly visitors from overseas, especially in the current climate when healthcare in U.S. is in a state of flux. Dr. Sujatha is a role model in this health fair initiative, and awareness of the size of the community’s need is inspiring others to organize similar health fairs.

As people come to find help at these fairs, they can also give help to others in the larger community: with the falling levels of blood in blood banks, there is clearly an urgent need for more blood donations as well as bone marrow volunteers. 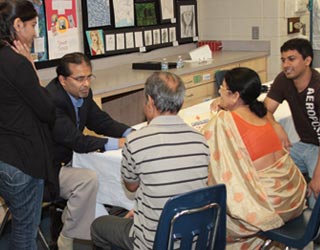 Because South Asian Americans tend to develop prediabetes, diabetes, low HDL (good) cholesterol levels, high triglycerides, and other heart conditions, Commerce Cardiology Group of Commerce, GA, and Cardiovascular Group of Lawrenceville were prepared and performed over 135 EKGs. The risk for type 2 diabetes occurs at a lower BMI (body mass index) for Asian Americans compared to other ethnic groups. Additionally, while diabetes was the seventh leading cause of death in the US in 2006, it ranked as the fifth among Asian Americans. So over 150 blood tests were carried out at a nominal fee of $25 per test, with lab work provided by American Clinical Labs of Stone Mountain.

Open-angle glaucoma is also a concern, with rates of about 7.7 percent among Indian and Pakistani Americans. Since Asian Americans have been the second fastest growing population in the U.S.—a trend likely to continue for years to come—such risks should be urgently heeded and are being studied at the University of Michigan. Vision and glaucoma screening tests were done at this fair by Dr. Indira Menon.

Of special interest to the Indian patients were consultations with naturopathy and Ayurveda expert Dr. Satish Nair of Gentle Awakening, together with Ms. Cathy Padilla.

Asian American women are at a higher risk for developing osteoporosis compared with Caucasian women, so bone mineral density screening tests were performed by a team of Madhusudhana Reddy and Vijaya Reddy under the supervision of Dr. Sujatha Reddy.

Early detection of breast cancer is important: a study found that in India only one in 40 women gets breast cancer, but in the US one in 8 Asian Indian women get the disease, the highest incidence in the world. So nutrition, exercise, prevention, and early detection are emphasized in these health fairs.

Since people needing bone marrow transplants are more likely to find a match within their own race, and since South Asian donors are in short supply, a bone marrow drive organized by AT&T and Oasis was part of this fair.

Blood banks are at the lowest levels in 15 years! So the Red Cross was there, with a goal of collecting 48 lifesaving units to help about 150 patients live one more day in the world. Another milestone was achieved as they collected 61 units. Donor recruiter Michelle Clarke lauded TAMA members. Donors felt good as they were provided with snacks, fruits, and drinks, and as they gave their gifts of life.

The mission of the SAI Health Fairs is to create an awareness of the importance of preventive health care among the public, for prevention, early detection, and cure. In these economic times, it is especially important to act on the old adage, “An ounce of prevention is worth a pound of cure.”