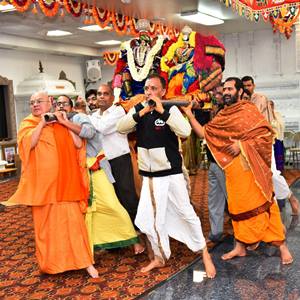 The Hindu Temple of Atlanta (HTA) has completed the Satha Chandi Sahita Ati Rudra Maha Yagna, an elaborate Hindu ritual, the ultimate Siva puja, a mammoth event that anyone is considered to be extremely fortunate to have the chance to witness. The timing, November 18-28, 2015, couldn’t have been better as it is Temple’s silver jubilee year, twenty-five years of being the focal point of the spiritual expression of the metro Atlanta Indian community.

The suggestion to conduct Ati Rudra Maha Yagna was made by an esteemed guest of HTA, the president of the Sivananda Ashram, Ahmedabad, Swami Adhyatmanandaji. Narender Reddy, HTA president at the time, then took the initiative, and a committee was formed in December 2014, under the leadership of coordinator Dr. B. K. Mohan; his wife, Rajyam Mohan; Dr. P. B. Rao, now president of HTA; Aravind Goli, puja committee chairperson; P. K. Raju, Dr. Sujatha Reddy, Krishna Kumar, Syamsunder Yellamraju, and Jaganmohan Rao. The well-respected Sanskrit scholar and Rig Veda pundit, Brahmasri Narendra Kapre of Hyderabad was invited to conduct the 11-day event, and vedic scholar Pannala Balu Sitharamanjaneya Sarma to lead the Satha Chandi Homam.

When the time came, they worked closely with HTA priests led by chief Vaishnavite priest Gopal Bhattar and chief priest of Siva temple Sri Srinivas Sarma. With the help of local ritwiks Hariharan and Abhiraman, and innumerable volunteers, this monumental vedic ritual was successfully completed on November 28, 2015 with thousands of people attending and participating in the celebrations. More than 130 ritwiks participated, many invited from India and some from other states within the US. Young ritwiks born and brought up in the US chanted Sri Rudram with perfection. Sacred water from many rivers and oceans all over the world was used in the 1008 kalasas (brass pots used for the ceremony).

Sri Rudram or Rudropasana, is one of the greatest of the Vedic hymns devoted to Lord Siva (Rudra Deva), the source of cosmic energy for the entire creation. Sri Rudram is an integral part of the Yajurveda, one of the most revered Hindu scriptures. It is recited in two parts, Namakam known for the repeated use of the word "namah" and Chamakam for repeated use of the word "chamE" (meaning “for me”). In this sacred hymn the devotee repeatedly salutes Lord Siva who pervades creation and humbly requests Him for blessings and benefits both in this world and beyond. It is believed that Sri Rudram is a great purifier and that when its powerful mantras are repeatedly chanted with devotion and faith, it can remove the malefic effects of the planets, bring in peace and prosperity to the universe, and aid in the betterment of humanity.

Ati Rudram is a complex ritual which takes place over 11 days. Eleven recitations of Sri Rudram is called Ekadasa Rudram. Eleven rounds of Ekadasa Rudram is Laghu Rudram. Eleven rounds of Laghu Rudram is Maha Rudram, and eleven rounds of Maha Rudram is Ati Rudram. During Ati Rudram, Sri Rudram is chanted for a total of 14,641 times (11x11x11x11), usually by 121 ritwiks (persons who have studied Vedas) performing Maha Rudram daily for 11 days. Each day, the event starts with Mahanyasam, a prayer to Lord Siva which helps the ritwik purify his body and mind. This is followed by Sri Rudram chanting while abhishekam or celestial bath ceremony to Siva in the form of the lingam is done by Vedic priests. The day ends with special homams or the sacred fire ceremonies to Lord Siva. A total of 1331 homams are performed, one for every 11 rounds of Sri Rudram.

The Chandi Parayanam and Chandi Homam were performed daily along with the Sata Chandi Yagnam on the last day of the event. The 1350 stanza slokas from Devi Saptasati were chanted a hundred times. Rudra is Siva and Devi is Shakti. Siva is cosmic energy and works through Durga—and in fact, the showers with thunder and lightning on the first day made attendees wonder about the presence of the Rudra Swaroopa in the vicinity. The energy of these mantras help devotees cultivate virtues and free them from lust, anger, greed, and jealousy.

During early morning for eleven days, Swami Adhyatmanandaji conducted hour-long, free guided meditation and pranayama classes. He enthralled audiences with his commentary on Devi Saptashati and other topics. Brahmasri Narendra Kapre’s discourses in Sanskrit and Hindi were succinct, informative, and enjoyed by everyone. A highlight of the celebrations was a daily discourse on Devi Puranam and the divine mother by Santosh Kumar from Hyderabad, who is known for his talks on spiritual matters on Bhakti TV in India. His rich voice and mastery of the subject attracted many to his daily talks. 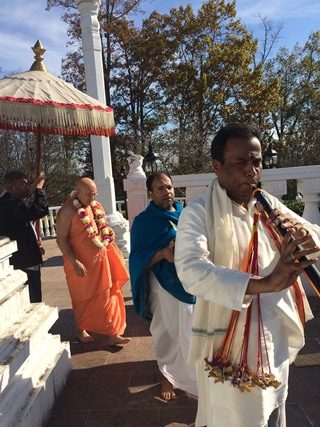 Pujas and homams included Ganapathi homam, Gau-puja, Chandi Saptha Sathi Parayana, Chandi homam, Rudra Homam at eleven Homa kundas, and Pavamana and Visesha Sarva Devata Homams. Archanas and parayana from 4pm to 7pm were followed with arathi, discourses, and cultural programs of dance and music. Theertha Prasadam was served to all from 8:30pm. Music of the nadaswaram (a double reed wind instrument in photo at left) by Muniswamy Lakshman and B. Srinivas, resident musicians of HTA, created an unforgettable atmosphere.

In a tent set up by Vidya Kutiram, an organization based in Chicago, Illinois, children took quizzes on Hindu religion, made flower garlands, playdoh Ganeshas, kolam (rangoli) drawings, and drawings of deities, and enjoyed many more exciting activities.

Saturday, November 28 was marked with joyous participation and spiritual fervor by hundreds of devotees and visitors for the grand culmination of the eleven-day celebration. Mahapoornahuthi followed Sahasra Kalasabhishekam. Rituals also included Vasordhara Pradhana Kalasa Prokshana, Santhi Kalyanam, and Rajaseer Vadam. The yagsala and temples resounded with Om Namah Shivay and Har Har Mahadev. The priests carried the kalasas with coconuts on top, followed by deities carried in a palanquin covered with an ornate umbrella, framed and garlanded pictures of Adi Shankeracharya and Lord Siva to the ringing of bells, thavil (a drum), and nadaswaram. Devotees showered flower petals as the swamis entered the Siva temple. It was a sight to behold!

A spectacular aspect of any event at HTA is the decoration of deities by the priests. During this celebration, each day’s decorations were better than the last. The lamps lit all through the temple, it being the month of Karthika, accentuated the beauty. Chief architect of the Ati Rudra pavillion, Mr. Picchappan created a magnificent hall for this yagna.

Dr. B. K. Mohan described some of the background work: Additional parking with shuttle service to two neighboring schools was arranged. A canopy next to the temple was erected for serving Theertha prasadam, lunches, and dinners. To promote the event, HTA conducted about 15 outreach rudrabhishekams as well as two major cultural programs, “Adi Sankara” and “Siva Leela.” Syam Yellamraju, Lakshmi Somayajula, and their team of volunteers provided specially cooked food consistent with traditional and vedic practices. Trustee Sairam Surapaneni was in charge of accommodations and transportation as well as kitchen activities. Ramakrishna and Srinivas cooked sumptuous prasadam and abundant food. Many talented volunteers helped with beautiful decorations. “No effort was spared,” declared Dr. Mohan, “to make this a wonderful spiritual experience for all participants and devotees. This is undeniably a once-in-a-lifetime opportunity to participate in one of the holiest, ritually studded, and most powerful yajna in modern times. This Maha Yajna was performed for Loka Kalyana, the welfare of all devotees, their families, and for Universal Peace and Prosperity.” 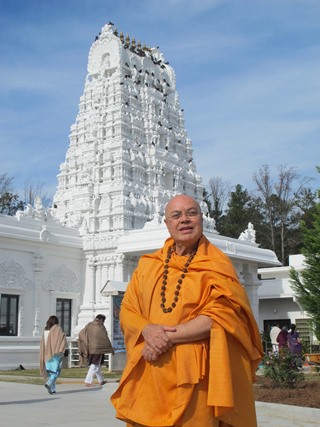