By Viren Mayani and staff
August 2019 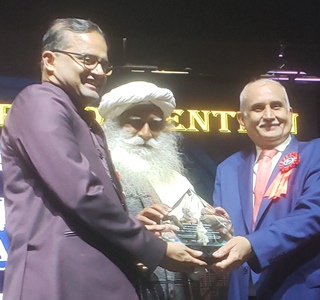 This year it was Atlanta that was graced with this bonanza event. About 2,000 delegates from across the nation attended the 37th annual AAPI convention from July 3rd to July 7th, 2019 at the landmark venues of Omni Atlanta at CNN Center and Georgia World Congress Center, Atlanta, Georgia.

Like conventions before it, the one in Atlanta didn’t disappoint. It was a glitz affair boasting an enviable roster of notable guest speakers, entertainers, celebrities and more, including: Dr. Patrice Harris, president of the American Medical Association (AMA); Sadhguru, a yogi, mystic, visionary, humanitarian, and bestselling author who has been listed amongst the fifty most influential people in India; singers Shankar Mahadevan, Anup Jalota, Kanika Kapoor, and Guru Randhawa; cricketer Kapil Dev; actors Priety Zinta, Gulshan Grover, and Omi Vaidya, and designer Archana Kochhar.

There were two “firsts”: a youth public speaking competition, and the much talked about “AAPI Has Got Talent,” where the AAPI members showcased their talents amidst their peers.

The Atlanta convention was ably headed by Dr. Sreeni Gangasani, who said, “The convention team has worked incredibly hard for the past several months to provide a delightful 4 days of events packed with educational CME credits, world-class entertainment, leadership seminars, networking opportunities, exhibits, and more.” 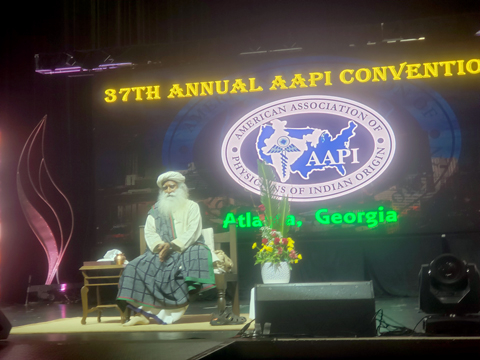 An auspicious start
The convention had an auspicious start with a keynote from the inimitable Sadhguru, a highly sought-after global speaker on a wide range of issues and topics including spirituality, leadership, environment, inclusive economics, and a lot more.

Sadhguru addressed the gathering prior to lunch on July 4th and his presence garnered an over the limit capacity in the audience. After making his presentation whilst seated on stage, in his majestic style, he even ventured on the catwalk to get as close as he could to audience members seeking answers to their questions during the Q&A session.

“Sadhguru, with his unique ability to make the ancient yogic sciences relevant to contemporary minds, and to act as a bridge to the deeper dimensions of life, enriched the life of delegates in so many ways,” said Dr. Anupama Gorimukala, Secretary of AAPI.

In his keynote address, Sadhguru addressed the problem of mental wellness amongst doctors, and the opioid endemic. “Doctors should be symbols of health,” he said. On the contrary, they are committing suicide at a higher rate than other people. Education, spirituality, and medicine, he said, should not be commercialized. “Market and medicine are two different dynamics.”

Sadhguru lamented that being in an affluent land with an immense choice of abundance, millions of people are without healthcare, which is a crime against humanity. 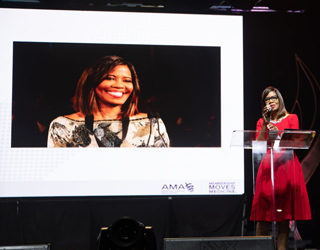 Speech by Dr. Patrice Harris, president of the American Medical Association (AMA).
Dr. Harris, an Atlanta based psychiatrist, now the 174th president of this storied organization, is the first African-American woman to hold this office. She highlighted AMA’s key initiatives to alleviate the health care crisis, from providing quality health care to meeting the growing shortage of doctors, particularly those in primary care.

She acknowledged, “We face big challenges in health care today, and the decisions we make now will move us forward in a future we help create.” She told the AAPI physicians that “the AMA is committed to nondiscrimination through policy and advocacy” and pointed specifically to AMA’s advocacy for fair immigration policies.

Pointing to the immense contributions of Indian American doctors, she said, “We value your contributions in healthcare. AMA is your partner and ally in patient care.” 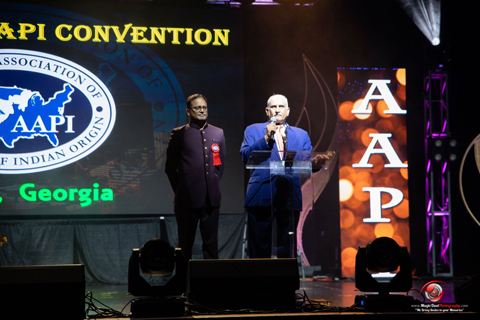 AAPI’s achievements and contributions
In his welcome address, AAPI President Dr. Naresh Parikh highlighted some of the major accomplishments during his presidency, particularly pointing to the campaign to rid India of TB with the $ 9 Million funds from the USAID. Stating that AAPI’s collaborative efforts with the Government of India and local organizations, several cities have become free of TB, and there are several others cities in India who are on the way to be become free. Dr. Parikh also highlighted the 10-city musical tour by Sukhvinder Singh which helped generate closer bonds between national and local AAPI Chapters, energizing the entire AAPI.

Almost 10%-12% of medical students entering US schools are of Indian origin. Headquartered in Oak Brook, Illinois, AAPI represents the interests of about 100,000 physicians, medical students and residents of Indian heritage in the United States. It is the largest ethnic medical organization in the nation. 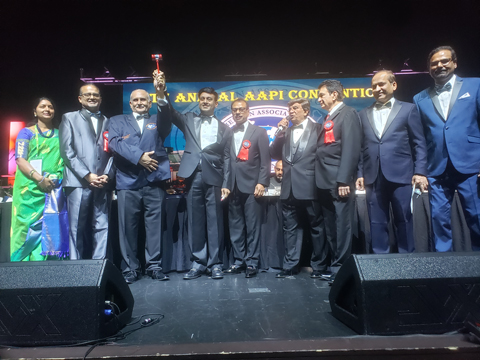 Incoming AAPI President, Dr. Suresh Reddy promised “to align all the energies to make AAPI an enormous force.” “We will bring increased dignity, decency, professionalism into the organization,” he added.

The entertainment
The fashion show had Indian-American models in fusion ethnic wear, walking the catwalk on superbly remixed fusion music and to an extremely tasteful backdrop of silhouettes. Designer Archana Kochhar from Mumbai displayed a wide array of new styles presented in chiffon, silks, and linen, superbly embroidered and refined looking. The light and contrasting colored fabrics in grey, orange, red, and navy turned everyone’s eye to the show. Surprisingly there was a junta of male doctors who had left their respective dinner tables to approach the catwalk for pictures. This enticing scheduled item was followed by the versatile Padma Shri Shankar Mahadevan and his troupe of brilliant musicians. Fashionably dressed in a black salwar-kameez with jacket, he opened with his reverence to Lord Ganesh with “ekdantaya vakratundaya” followed by a nonstop pallet of assorted hits. The crowd just wanted to dance nonstop but he was kind to throw in some of his famous lilting tunes as well. They included hits like “Vande Matram,” “Bhumro,” “Dil Chahta He,” “Koi Kahe Kehta Rahe,” “Pretty Woman,” “Kajra Re,” and a whole lot more. His younger son accompanied him after almost half the program, and arguably he sings just as well as his famous father.

The highlight for July 6th was a scheduled golf outing with Kapil Dev, India’s iconic cricketer, a superb golfer himself, who drew a significant crowd at the fields. He was very approachable and took no issues from nongolfers gathered there just to take pictures with him.

The final evening’s show stopper was the melody king and Bhajan Samrat Anup Jalota. Decked in a bright colored salwar-kameez, he opened the night with late Jagjit Singh’s ever famous songs and ghazals, quickly transitioning to Kishore Kumar’s hits, having the guests on the floor reeling in music and dancing to their heart’s content. He, too, was able to infuse some softer hits in between the rhapsody. He was joined by Bollywood’s noted composer Uttam Singh’s daughter, who is also a noted singer in her own right: Preeti Singh who resides in Atlanta. Dressed in an attractive black saree she pelted a few hits from film Bobby with Anup ji. Another star who added to the glamour was Atlanta’s ophthalmologist Aarti Pandya. Trained in the Indian Hindustani classical music, she sang Farida Khanum’s “Aaj jaane ki zid na karo” at its best. Contrastingly to Preeti, she was attired in an ethereal and angelic white with gold embroidery salwar-kameez suit. Anup Jalota will be celebrating his fifty years in music next year and will launch his 2020 tour on the day of his 50th anniversary beginning with Atlanta.

The finale of the night was the much anticipated “AAPI Has Got Talent” led by Dr. Amit Chakraborthy and Dr. Hemant Dhingra, where AAPI members showcased their talents in art, cultural events, and music.

The AAPI recognition lunch was the draw on July 5th wherein individuals were felicitated for their service and achievements with the AAPI fraternity in as much as the evening’s dinner recognized community leaders and others. Dr. Jag Sheth and Vir Nanda from Atlanta were honored for their business acumen and leadership, besides others. 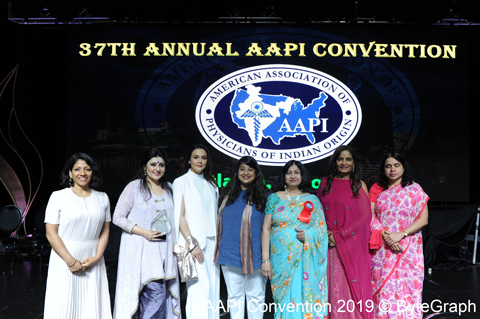 AAPI Women’s Forum discusses changes in women’s careers
“I have to work double hard in Bollywood. Men had lots of freedom and can have their way. Women had to be confined to line always,” recalled Bollywood actor Preity Zinta, in her keynote address at the Women’s Forum to a packed audience at the Convention.

Chairwoman of the Women’s Forum, Dr. Asha Parikh, said, “The Women’s Forum is where successful and powerful women come and share their life’s dreams and challenges, and this empowers and inspires other women. Today’s Forum is about how career changes by women affect them and the larger society.”

Dr. Udaya Shivangi, Vice Chair of the Women’s Forum and a veteran at the Forum since its inception, moderated the panel discussion.

Preity Zinta said that in a developing country like India, “Women have come to be successful and they have to be working really hard.” She stressed the need for equal wages. Education of women is critical and the need of the hour. It shows a woman’s strength and how much she can do to better the life of her children. Furthermore, “I believe that woman empowerment means financial independence.”

Aparna Bhattacharyya described her advocacy role and the work that Raksha does for women. Describing violence against women as “most shameful,” Bhattacharya noted that violence against women is a global phenomenon and called for education towards gender sensitization. “I started as a volunteer, working with survivors, and wanted to help victims of crime in my community,” she recalled. “Breaking the silence by talking about violence and empowering those silently suffering has been the biggest challenge,” she said. “Women need to support each other and applaud each other’s victory,” she told the audience.

Malini Moorthy pointed to discrimination in the business world: in filling leading positions and in pay, men are always preferred over women. She called upon “more people to speak out against any type of discrimination.” Stressing the need for equality, she said, “Keep fighting and support one another.”

Archana Kochhar spoke about career choices in the highly competitive fashion world: one needs to be prepared with hard work, creativity, dealing with people, especially being humble and having an open attitude, she said. “We should work hard on building our brand; be able to recognize your uniqueness and build on it and pursue your career.” She shared her inspiration to start SMILE, a foundation that works towards education of girls in India, after seeing an acid victim. In her efforts to help victims with their treatment, she had an acid victim walk in a New York fashion show, which made headlines across the world. “When we share our platform for a noble cause, we can create magic for all,” she said.

Dr. Swati Kulkarni gave credit to her Mumbai uncle who “dragged” her into career diplomacy. Stating that she misses being with patients and caring for their health, Dr. Kulkarni said, “My medical career gave me the rigorous discipline which has made me successful in my present career. I miss my OPD (Out Patient Department), but I love my new career and work.” In her message to women, Dr. Kulkarni said that “Education is the keyword which will empower women socially, emotionally, and economically. Financial independence will give one self-respect and she can become a key role model for others.”