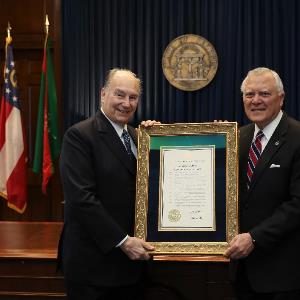 (Left) Governor Deal presents His Highness the Aga Khan with the Proclamation from the State of Georgia in recognition of his 60 years of commitment towards improving human condition around the world. (Photo: Courtesy of AKDN / Akbar Hakim)

His Highness Prince Shah Karim Al Hussaini, Aga Khan IV, arrived in the United States on March 14, 2018, as part of his yearlong celebration and global tour marking his Diamond Jubilee, his 60th anniversary as the 49th hereditary Imam (spiritual leader) of the world’s Shia Ismaili Muslim community. He had already visited Pakistan, India, and several other countries in the past few months.

Mawlana Hazar Imam flew into Atlanta and was received at the Fulton County Airport by Casey Cagle, Lieutenant Governor of the State of Georgia; Abby Turano, Deputy Commissioner for International Relations at the Georgia Department of Economic Development; Daniel Gordon, Chief Operating Officer of the City of Atlanta’s Office of the Mayor; and more than 200 leaders of the jamat from around the country. As Hazar Imam landed, he was welcomed with an official salute by the Atlanta Police Department Honor Guard. The national 116th Army Band played both the “Nashid al-Imamah,” the Ismaili anthem, and “The Star-Spangled Banner,” the U.S. national anthem.

During his 10-day visit to the U.S., Mawlana Hazar Imam was scheduled to visit Georgia and Texas, to meet with the governors of both states, as well as with the USA jamat during mulaqats in Atlanta and Houston.

Georgia’s Governor Nathan Deal presented His Highness with a State Proclamation recognizing his 60 years of dedication and inspiration towards improving the human condition around the world. The presentation was made at a meeting held at the Georgia State Capitol attended by Chief of Staff Chris Riley and Abby Turano. The Governor congratulated His Highness for his profound vision and leadership over the past sixty years. They discussed a shared vision of improving the quality of life for all people by promoting early childhood development, planning for the future, and creating opportunities for economic growth. They also discussed areas of partnership around research in vocational education, healthcare, and agriculture, as well as best practices in student and faculty exchange.

In the context of his hereditary responsibilities, His Highness has been deeply engaged with the development of countries around the world through the work of the Aga Khan Development Network (AKDN). Programs are conducted without regard to faith, origin, or gender. The AKDN works in 30 countries, including the United States, and employs more than 80,000 people. The Shia Ismaili Muslim community, inspired by His Highness, actively contributes to the wellbeing of all citizens and community service initiatives in Georgia.

His Highness has, over the last six decades, received numerous decorations, honorary degrees, and awards from institutions and nations across the world. Most recently, in 2017, the Aga Khan received four prestigious honors in the United States: the Foreign Policy Association Medal; the President’s Medal by the Architectural League of New York; the Champion for Global Change Award by the United Nations Foundation; and the Asia Game Changer Lifetime Achievement Award by the Asia Society.

Atlanta was the only city other than Houston to host a visit this year, in part because it’s home to a large community of Ismailis, many of whom hail from South Asian countries like India, Pakistan and Bangladesh (though adherents are found in more than 25 countries across Central Asia, East Africa and elsewhere.)

Locally, Ismailis congregate for prayers in five jamatkhanas around the metro area, including two in Gwinnett County and another in the deep red brick structure across from the Patel Plaza shopping center on Dekalb Industrial Way in Decatur. As centers of community life, they have also been active in promoting interfaith dialogue around the metro area.

But it wasn’t just Atlanta Ismailis welcoming the Aga Khan. Many flew in from across the country and around the world to get a glimpse of the man they see as the heir to a 1,400-year-old tradition.

About the Aga Khan Development Network
The Aga Khan Development Network (AKDN), which was founded by His Highness the Aga Khan, is a private, international, nondenominational development organization. It employs over 80,000 people in over 30 countries. Its agencies address complex development issues, including the provision of quality healthcare and education services, cultural and economic revitalization, micro-enterprise, entrepreneurship and economic development, the advancement of civil society and the protection of the environment. For more information on AKDN, please visit: www.akdn.org

The Aga Khan and the Shia Ismaili Muslim Community
The Aga Khan is a direct descendant of the Prophet Muhammad through his cousin and son-in-law Ali, the first Imam, and his wife Fatima, the Prophet’s daughter. He succeeded his grandfather, Sir Sultan Mahomed Shah Aga Khan as the Imam of the Shia Ismaili Muslims sixty years ago, at the age of 20. Today, His Highness the Aga Khan leads a global community of Shia Ismaili Muslims, living predominantly in South Asia, Central Asia, Africa, the Middle East, Europe, North America, and the Far East. Like the Muslim world as a whole, the Ismaili community represents a rich diversity of cultures, languages and nationalities. His role as Imam includes the interpretation of the faith for his community and responsibility for religious institutions and his followers worldwide. More information is available at https://the.ismaili and https://the.ismaili/usa