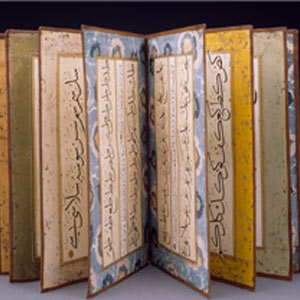 A current special exhibit in the Carlos Museum of Emory University, titled “Traces of the Calligrapher” explains the practice of the Islamic calligrapher from the 17th through the 19th centuries by showing both the astounding works of art and the fascinating tools of the trade.

In the eyes of Dr. Gordon Newby, South Asia is an important part of the Islamic world. After studying the Middle East, the Arabic language, and the Mediterranean, Dr. Newby took the helm of Emory University’s Department of Middle Eastern and South Asian Studies, and began work on an encyclopedia of the Islamic world. India has a huge Muslim population, he explains, and the subcontinent has almost as many Muslims as Indonesia—more, in fact, than in the entire Middle East. Historically the influence of Muslims from India on the rest of the Islamic world, particularly in artistic expression, has been tremendous. The exhibit has some wonderful materials from India—not totally representative of Indian calligraphy, simply because of the particular collection that it came from—but further, it gives insight into India’s place in the Muslim world. Historically and culturally, across that broad region of South Asia and the Middle East, and beyond, the people have interacted with one another, allowing influence to spread and ideas to flourish. In the realm of calligraphy, there is a world to be discovered.

The visitor can see a video of a calligrapher at work and about 150 objects: examples of works that a student would study (with colors vibrant, delicate, or gilded), pages to be practiced, and tools to be made and used (a myriad of works of art themselves, carved, inlaid, painted and varnished, of ivory, silver, nachre, glass, leather, gold, steel, and more).

Moreover, aspects of belief and culture can be gleaned and understanding developed. For example, since Muslims believe the Koran to be revelations from God, the Koran, written in Arabic, created a new prestige for the art of language, its written form and visual expression, thus elevating the status of all books and the art of writing. Muhammad is supposed to have said that the first thing God created was the pen. The practice of calligraphy became an expression of piety for all—and inhibited adoption of mechanical means of writing, such as the printing press.

This exhibit will delight not just the artist, the theologian, the historian, but anyone who has ever said “This is the perfect tool for the job,” anyone who has felt the added thrill of using a tool that is actually a work of art, and finally anyone with any appreciation for beauty. The exhibit is open, for “enjoyment, inspiration, and education,” until December 5, 2010. It is free from 1-4pm on 11/19 and 11/24.