The Cloud comes to Atlanta 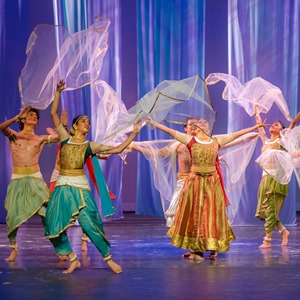 Rarely does a city have the good fortune to host an event that can simultaneously be described as a terpsichorean pageant and a melodic extravaganza. Atlanta had this rare stroke of luck on August 24, 2014 when it hosted Meghadootam – The Cloud Messenger, an operatic ballet that brings to life on stage all the beauty and exquisite pathos in Kalidasa’s immortal lyrical poem.

Meghadootam was conceived and produced by the Cleveland Cultural Alliance (CCA) and hosted in Atlanta by Eashwar Money, under the auspices of AIM for Seva, the charitable organization founded by Swami Dayananda Saraswati. AIM for Seva seeks to transform Indian society by empowering and educating underprivileged children by providing housing, value-based education, and nurturing them in over 100 free student homes (FSH) established in 15 states across the country. This year AIM for Seva Georgia has adopted four FSHs one each from Gujarat, Andhra Pradesh, Tamil Nadu, and Karnataka with a total of 105 children. This year’s fundraising efforts reached their goal of supporting children in all the four adopted FSHs.

This exemplary operatic ballet was choreographed by the renowned couple of Shijith Nambiar and Parvathy Menon, whose deft Kalakshetra touch transformed this timeless love song into a visual pageant. Meghadootam – The Cloud Messenger speaks of the yearnings of a love-lorn Yaksha who has been exiled to remote Ramagiri from his native Alakapuri by Lord Kubera. As he sits beneath the shady trees of the forest (Snighdhachhayatarushu), lamenting the separation from his beloved wife, the Yaksha sees on the first of Ashadha a cloud perched on the mountain peak. The love-smitten Yaksha beseeches the cloud to take a message to his beloved, and prepares him for his journey by describing the northward route in bewitching, enticing terms. The cloud (the Megha) then departs. The journey of the Megha is described in such vivid and exquisite manner through a wonderful (and appropriate) selection of slokas from the Purvamegha and Uttaramegha sections of Kalidasa’s poem. As the cloud travels to distant Alakapuri it ceases to be a mere messenger; instead, it achieves a singularity or a unity (tadaatmya) with the Yaksha, and self-identifies itself as that unfortunate exile.

Shijith Nambiar’s light-footed exposition of the fleeting cloud and wonderful bhavabhinaya gave a superb account of this transition from messenger to messager (Yaksha). In fact, the artistry and grace with which every one of the dancers (Pavithra Srinivasan, Aarabhi Badri, Bhavajan Kumar, Sudharma Vaithiyanathan, Sharanya Varma, Bhagyalaxmi, Season Unnikrishnan, and K.M. Jayakrishnan) executed the various sequences made this dance the visual treat it was. Be it the Chataka birds eagerly indicating to the cloud “the path of his droplets” (Saarangaasthe jalalavamucha...), or the welcoming cries of teary-eyed peacocks (Suklaapaange sajalanayane…), or the cloud “playing the laudable part of a drum during the evening worship of Shiva” (Apyanyaasi jaladhara mahakaalamasadya…) these skilled dancers gave visual expression to the immortal shlokas of Kalidasa.

One of the principal factors behind the impact achieved by this ballet is, without doubt, the melodic expression given by Bombay Jayashri Ramnath to the underlying text. With her impressive music and scholarly application of the right raga and right instrument at the right time, Bombay Jayashri made this dance a veritable musical treat as well. In fact, the interplay between the music and the dance was made all the more striking through the understated use of stage props (all too rare in a ballet!), which was limited to a series of diaphanous curtains strung at the rear of the stage. As Savitha Viswanathan, Director of Nritya Sankalpa Dance Academy, put it, “The music, the choreography, and the lighting were exemplary. The minimal use of backdrops was a striking change, and it beautifully enhanced and accentuated the story line.”

Special mention must also be made of the wonderful narration prepared by Bharadwaj Rangan, and enunciated by Rajiv Menon, Arvind Swami, Bombay Jayashri, and Parvathy Menon. This splendid English narration went a long way towards enhancing the audio-visual experience and holding the audience enthralled in the story line.

Performing Arts events that usually accompany fundraisers are, all too often, somewhat lacking in artistic merit. AIM for Seva and CCA are to be congratulated in producing something that is such a spectacular exception to this rule. Let us wish them every success in raising the funds for the Free Student Homes initiative, and hope that they will be back again with another production that is every bit as magnificent as Meghadootam – The Cloud Messenger!