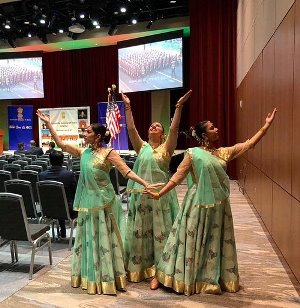 
The audience arose for the Indian and American national anthems. Dr. Tom Price then spoke of the warmth and hospitality that the Indian community has extended to him over the years. Representative Silcox was appreciative of being invited, and most of all, Mayor Paul was excited to host an international event of this repute. Consul General Kulkarni highlighted India’s successes and programs to serve the disadvantaged. She noted that Indian companies are creating offices in the U.S. and hiring local talent. She spoke of the many Indian students who pay fees to U.S. universities, thereby significantly contributing to the balance of trade, besides the traditional spending of the Indian Armed Forces for new technology and military armaments and fighter planes. She thanked the City of Sandy Springs for being a huge partner and supporting all efforts of the Indian Consulate.

Sound and screen were managed by Sandeep Savla of AV Creations, and delicious food was catered by Ricky Walia of Masti. Master of Ceremonies was the Consulate’s Head of Chancery, Consul Shailesh Lakhtakia, who did an extraordinary job.