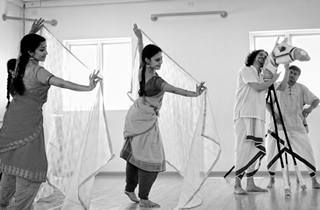 Continuous innovation is necessary for any art to survive and stay vibrant and invigorated. However, while most artistes are content to merely stand at the bank in safety and dip a toe in the waters of experimentation, so to speak, a few hardy souls take the plunge and gleefully experiment with both the form and the content of their beloved art. Sheejith Krishna, a distinguished alumnus of Kalakshetra, is at the vanguard of such experimentation and his spirit of innovation is amply evident in his daring adaptation of the novel Don Quixote. Eschewing the tried and trusted themes from Indian mythology, Sheejith has turned to the age of chivalric romances in Europe, specifically, to this gem of the Spanish Golden Age from Miguel Cervantes and crafted a brilliant exemplar of dance-theater. 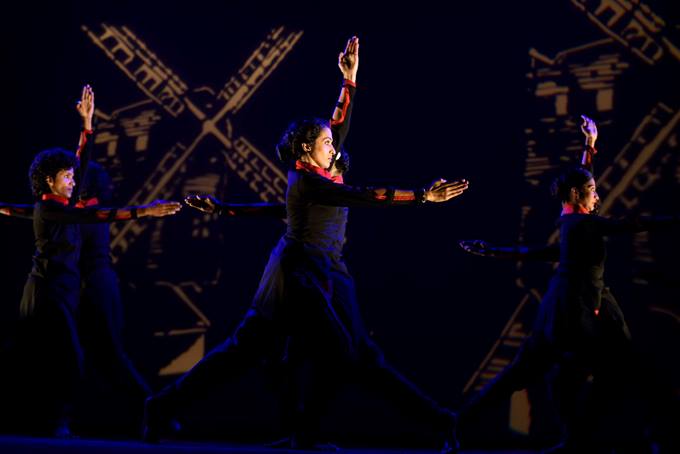 Dance and theater lovers in Atlanta had the singular fortune to see this masterly creation of Sheejith on October 11, 2015 at the Robert Ferst Center for Performing Arts in Georgia Tech. Sheejith and his fellow dancers from the Sahrdaya Foundation were in Atlanta on the last leg of a tour organized by the Kalapeetham Foundation of Los Angeles. The event in Atlanta was hosted by Savitha Vishwanathan’s Nritya Sankalpa Dance Academy, in aid of MV Foundation.

Taking on the lead role of Don Quixote, Sheejith was admirably supported by Madhusudhanan as Sancho Panza, the hapless squire of Don Quixote. Fusing art forms from two widely differing cultures is always fraught with risk, but Sheejith never baulked at the challenge. In the amusing interlude where Sancho Panza is introduced, the dance steps were rooted in the matrix of Bharatanatyam adavus with such an overlying suggestion of flamenco that one could almost hear the castanets! This illusion was no doubt engineered by Jyotishmathi Sheejith’s incredible music. In fact, Don Quixote is as much a testament to boundary-breaking innovation in traditional dance music, as in the form and content of Bharatanatyam itself. Jyotishmathi’s music, with its blend of classicism and avant-garde motifs provided words and dialogue to the visual tapestry prepared by Sheejith.

A particularly telling example of Sheejith’s willingness to up-end the apple cart of convention was evident in the scene where Sancho Panza takes possession of the insula to which he was awarded the governorship. In the place of the conventional fanfare (featuring trumpets and other brass instruments) Sheejith has used Panchavadyam, the stirring percussive symphony from the temples of Kerala. In fact, both Sheejith and Jyotishmathi felt the need for melodic fidelity to be so great in this scene that instead of using canned audio tracks they arranged a live panchavadyam set at their studios! 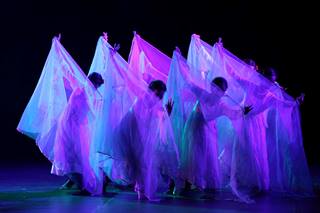 When asked why he selected Don Quixote as his point of departure for this experimental exposition, Sheejith had just one answer. “It is a very human story…Don Quixote was a dreamer. Just as we all are dreamers. Just as all human beings are dreamers”. That, of course, is reason enough to choose this shining romance as a fount of content for any experimental forays. Let us hope that this is just a taste of more innovative fusions to come from Sheejith’s fertile imagination!

A poster from the tour.

Link:
For more information on the production, see http://www.quixote.in/

Photos of the Atlanta presentation taken by Venkat Kuttua, added 12/1/15:​

[The article above appears only on the website for December 2015, not in the December print/digital issues.]