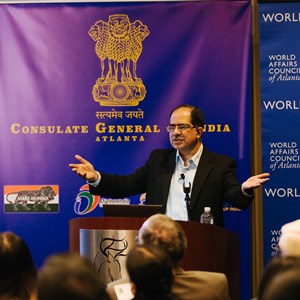 Two major trade events, back to back in November, showcase how serious is the trade mission of Atlanta’s Indian Consulate for the Southeastern US, and how committed Consul General Nagesh Singh is about seriously touting the change in trade policy and achievements in India, to the mainstream United States.

The first trade event​, India-US Manufacturing Partnership Meet, hosted at the Commerce Club in Buckhead on November 8, 2017, had a multifold objective: to present the growing number of medium to large Indian corporations migrating their presence to the US, not just to trade but to manufacture and process goods and services, thereby engaging the local managerial and workforce talent; and to present the trials and tribulations that these organizations face when trying to establish their presence in the US. A further objective was to highlight how Indian companies have been able to buy out floundering US companies and rejuvenate them; these transformations didn’t occur just from financial backing and investment, but also from shrewd business contract negotiations and creative thinking. The presentations convincingly promoted the depth of global business acumen by Indian companies despite many of their shortcomings. Cosponsored by KPPB Law and KNAV CPA, the conference was an eye-opener to many. 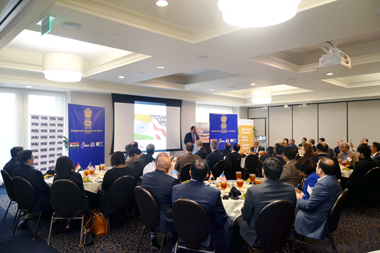 Consul General Singh spoke confidently about the turning of the page in India’s business climate, with the focus steady on making business easier. India’s ranking has upped significantly in recent years. The keynote address was provided by Mr. Niraj Tipre, CEO of Piramal Glass USA Inc, who spoke about the advantages of having a plant in the US, and the growth possible to achieve because of it.

The surprise package of the day was entrepreneur Harsha Agadi who has successfully owned and run Quiznos, Church’s Chicken, and now Crawford and Co. He noted the alignment of Prime Minister Modi’s “Make in India” with President Trump’s “Make America Great Again.” Agadi advised the Indian company leaders to have a wide board of advisors from the mainstream US, since an American perspective on goods, services, and customer care is pivotal for growth. “When in Rome, do as the Romans do!” Agadi described how Crawford and Co took the opportunity to serve in the US’s multiple recent natural disasters. When they did not have enough appraisers and adjusters to complete the thousands of claims, he reached out to India and elsewhere for multi-lingual talent.

The following evening, a second business conference, “India’s Cashless Future: FinTech as a Solution,” was hosted at Georgia State University’s Buckhead Center in collaboration with the World Affairs Council of Atlanta, led by its President, Ambassador Charles Shapiro. The speaker was Sharad Sharma, Cofounder of the Indian Software Product Industry Roundtable (iSPIRT). Sharma has two decades’ experience in the enterprise software and infrastructure markets and now a prominent voice in India’s entrepreneurial ecosystem. He cofounded Teltier, a wireless infrastructure startup which is now part of CISCO.

Consul General Nagesh Singh spoke of the great support Ambassador Shapiro has given him and what a difference that friendship has made for him. Singh noted how lucky we were to be able to host Sharma as he was visiting his kin at nearby Duke University. Sharma is a force to reckon with, he said, with a great paying-it-forward story, in returning to live in India and make a difference for his country of birth.

Sharad Sharma began by seeking pardon for being dressed in jeans, since he usually confers with techies and was surprised to find a room full of entrepreneurs, academicians, and delegates. Skipping his heavy tech conversations, he quickly described India’s movement from the Manufacturing Age to the Digital Age and the benefits it has found there.

For example, the Aadhar card has brought more than security. Unlike the US where a baby gets a Social Security Number, Indian children are often not born in hospitals. With the Aadhar card becoming more and more necessary, the census will become more accurate over time.

The demonetization project to weed out black money and lessen corruption is another example. Sharma spoke of the India Stacks, a multi-layer technology of processes that broadly divided the Indian masses in 3 verticals of 300 M each, differentiated by the level of education (formal or informal) and prosperity and with communication to each of these 3 verticals. It’s a digital miracle since people began using the mobile phone much before even the LAN lines were laid or internet infrastructure was set up throughout the country.

At the end of the complex yet very engaging presentation, a quick Q and A could answer only a few of the many questions on India’s progress.