The show must go on…Kathak Utsav by Aparna 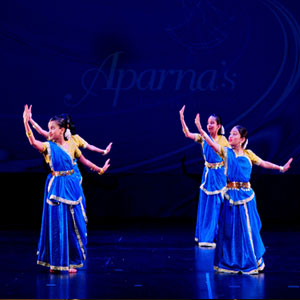 Aparna’s Dance Academy hosted its 6th annual show, Kathak Utsav 2012, at the Alliance Theater, at Woodruff Art Center, on May 26, 2012.

The event has occurred against odds. Three weeks before the program, the Academy’s director Aparna Sharma gave birth to their son. Yet she was with her students at the event, directing all dance performances.

Aparna choreographed each dance, trained students, selected costumes, and carried out every detail of organizing the big event throughout the nine months of pregnancy. In her speech, Aparna dedicated the program to students, parents, and family members who have supported her throughout these nine months with their love and dedication to the academy.

For the past two years, Kathak Utsav’s main attractions were in-house productions: Rituraj in 2010 and Mahishasur Mardini in 2011. This year, Aparna described the theme: “Whether the music is Indian classical, Kathak Bol, folk music, or from Hindi film music, the dance is still based on one form, Kathak,” she emphasized.

Senior students performed Tarana, first on a composition on raag Malkauns, and then on a composition of Birju Maharaj. “As a choreographer,” said Aparna, “my job is to make music visible to audience through dancers.” Dancers moved their hands gracefully, performed rapid but rhythmic tatkar (stamping of feet), and continued to change formation on stage rapidly.

Junior students performed Tarana and other Kathak pieces on music composed by Aparna herself and on a contemporary composition by Brikram Ghosh.

The youngest students, one only three and a half years old, stole the hearts with cute bhav (hand movements) and tatkars on the song, “Chalka chalka” from movie Saathiya. The little ones did not miss a single move during their entire performance. 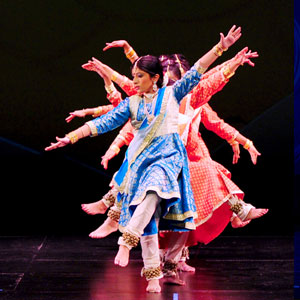 “My guruji, Shri Rajendra Ganagani,” said Aparna in her introduction, “has directed me to keep Indian folk dances alive by promoting them, as some of the oldest folk dances are in danger of extinction.” For Rajasthan’s folk music, beginner junior students performed on a song, “Ghoogra Jada de,” which shows a woman’s passion for dance. An adult beginner group performed on a song of Lata Mangeshkar and Illa Arun from movie Lamhe.

Several other combinations of Kathak, folk, and dance on Hindi film music followed. On the song “Dhol Bajne Laga” young performers took over one hundred Jaipur gharana style chakkars (spins or pirouettes) in less than five minutes. The audience joined them by clapping along.

The final item was on a passionate, upbeat and beautiful song, “Dola re Dola” from movie Devdas. Junior students danced to this upbeat music, rapidly creating formations, dissolving them, and then creating a new formation. Even with over hundred chakkars at dizzying speed, they kept in time. This brought the audience to their feet, clapping and creating joyous noise.

Dance choreography is analogous to an artist’s work, such as delicate carving on a marble stone: the beauty of the shape, intricacy of illustration, delicacy, and subtlety make the end result a masterpiece.