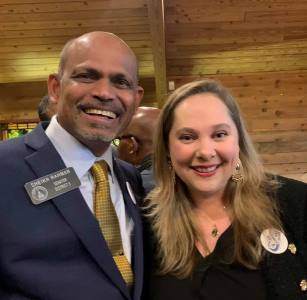 (Left) State Senator Sheikh Rahman and Sarah Riggs Amico, who ran for Lieutenant Governor in 2018 and is now one of the three candidates running for Republican U.S. Senator David Perdue’s seat.

On Saturday, February 8, 2020, the Georgia chapter of They See Blue, a national organization for South Asian Democrats working to flip seats blue, held their 2020 Election Kickoff at the Northwest Unitarian Universalist Congregation in Atlanta. The event celebrated the birth of one of the first groups for South Asian Democrats in the Southeast. Despite the morning snowfall, some 150 attendees filled the sanctuary and spilled into the lobby.

The emcee for the program was Feroza Syed, a They See Blue Georgia member and trans activist.

Former Georgia Minority Leader and Founder and Chair of Fair Fight Stacey Abrams served as the keynote speaker. Leader Abrams talked about her 2018 campaign, the importance of building coalitions across communities, and getting out the vote. “We can change what happens in 2020,” she said. “We can show up.” Abrams also addressed the upcoming Census, and warned of a possible undercount in communities of color. Some 300,000 Asian Americans and Pacific Islanders are expected not to be counted. “The census is more than a count,” she stressed. “It’s about money and political power.” 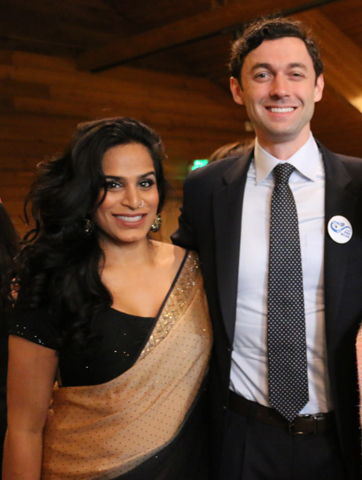 Three of the candidates running for Republican U.S. Senator David Perdue’s seat, former Columbus Mayor Teresa Tomlinson, Sarah Riggs Amico, who ran for Lieutenant Governor in 2018, and Jon Ossoff, who ran for Congress in 2017, spoke about why they decided to run for office, the experiences they would bring to the table, and the impact they hoped to make in Washington should they win the primary on May 19. All three promised to send Senator Purdue packing, and were particularly keen on restoring inclusivity and respect for all people in the U.S. 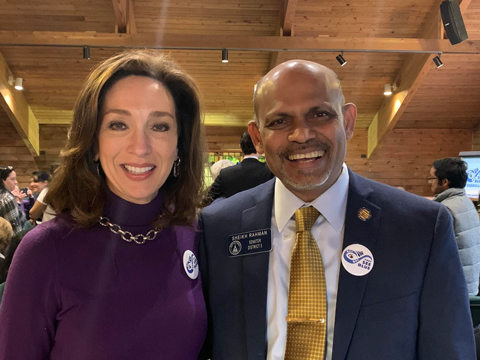 Rahman talked about the diversity of the district he represents, District 5 in Gwinnett County. Several times during his speech the crowd erupted in cheers. “I tell people I represent the United Nations,” he said. There are people from more than one hundred countries, who speak more than one hundred languages. “My friends,” he said, “this is no time to stay on the sidelines.” He then explained how one vote can make a difference. “When I got elected to the Democratic National Committee, I won by one single vote,” he said.

They See Blue, an organization for South Asian Democrats, began in the Bay Area in August 2018. The Georgia chapter opened in August 2019, and is nearing 200 members. Six people make up the core team: Anu Banerjee, Anjali Enjeti, Vyanti Joseph, Suresh Kolichala, Uma Pulendran, and Viju Rao. The chapter welcomes South Asian Democrats from the entire state, as well as noncitizens. Since its inception, They See Blue Georgia has held meetings about municipal elections, voter suppression, and the Georgia legislative session. They See Blue Georgia does not endorse candidates until after the primary elections.

The chapter prides itself on its diversity. “What’s unique about They See Blue Georgia, is that we are an inclusive, anti-bigotry coalition,” says core team member Vyanti Joseph, a Cobb County resident. “Our members are multinational, multiethnic, multifaith, as well as nonreligious. Having political spaces that seek to unite, rather than divide, is crucial in the current political climate.”

“They See Blue Georgia’s kickoff made me feel energized and proud as an Indian-American voter,” says Saif Issani, a resident of Gwinnett County. “It’s my goal to get as many people in our community involved to fulfill their civic duty by voting, and flip our state blue!”

“As a South Asian Democrat and a professor, who understands the importance of diversity for scientific research and business, which will ultimately enable the United States to maintain its super power status, I believe that the work They See Blue Georgia is doing is significant,” says Pamila Dembla, a Cobb County resident. “South Asians are some of the most influential immigrants in the United States and can have significant impact in redefining the cultural fabric of this country. The Senate candidates on Saturday spoke about a multitude of issues affecting the community.”

Upcoming events for They See Blue Georgia include meet-and-greets with state, congressional, and senate candidates, and voter registration drives. There are no membership fees. For more information on how to join, email tsb.georgia@gmail.com.