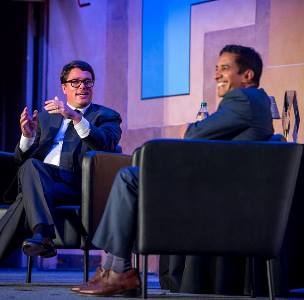 On September 22, 2016, TiE Atlanta lit up downtown Atlanta at “the fabulous Fox” Theatre with its 2nd annual Top Entrepreneur Awards ceremony. TiE Atlanta, a top-4 chapter in its ecosystem, connects with a global network of entrepreneurs spanning 65 chapters across 18 countries. Its mission is to foster entrepreneurship through mentoring, networking, and education through 70 programs a year starting as early as high school/university students to companies with up to $800 million in revenue. Since its inception in 1998, TiE Atlanta members have raised more than $1.5 billion in venture funding, run at least 90 successful public and private companies with a market cap of well over several billion dollars, and generated more than $4.5 billion from acquisitions. The award ceremony is one of TiE Atlanta’s most noteworthy events.

Arnold’s interest in healthcare began when he met his future wife, Meg, who was in nursing school. He was impressed to see healthcare firsthand through the eyes of a nurse. He immediately quit his job, borrowed money from Meg’s dad and started an EKG company in his early 20s, eventually serving over 60,000 patients with irregular heartbeats. He told the audience, “Don’t get too enamored with technology. Instead, build relationships, get compliance, get results so you get more users and eventually you will get the business.”

Fear, risk, company culture, and funding are always popular topics with entrepreneurs. Dr. Sanjay Gupta posed a straightforward question, “What is your take on fear?” and Arnold replied, “I simply just don’t operate with any fear. Failure isn’t an option when the stakes are high.” Arnold touched on the survival of WebMD through the dotcom bust and realized that, “Even when times are tough, healthcare is always a worthy mission.” With respect to Sharecare’s culture, Arnold shared that culture means putting yourself in other people’s shoes. Helping other people gets you through the good times and the bad and eventually builds a loyal workforce.

Atlanta is always battling with the availability of funding—angel, venture capital, and private equity. Arnold candidly stated that Atlanta doesn’t have the infrastructure to take a company from Series A to scale and exit. Austin and Nashville have the infrastructure since those cities really root for the entrepreneur; they put a lot of capital behind entrepreneurs. So what is Atlanta doing right? Arnold was encouraged by the increase in incubators and accelerators, and said they are “a massive step in the right direction.”

“Health needed a homepage—Sharecare was born.” Arnold bought the data, analyzed it through machine learning and artificial intelligence, and finally digitized it to produce a patient journey from diagnosis to cure. What is Arnold’s formula for success that works anywhere in the world? It starts with passion, a strong team, getting to proof of concept fast, and knowing how to scale as it has to happen now—tomorrow is too late. He closed with a prediction: “You will see more progress in healthcare in the next 24 months than in the past 24 years.” 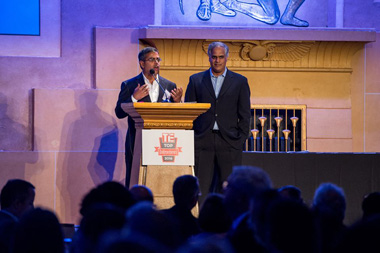 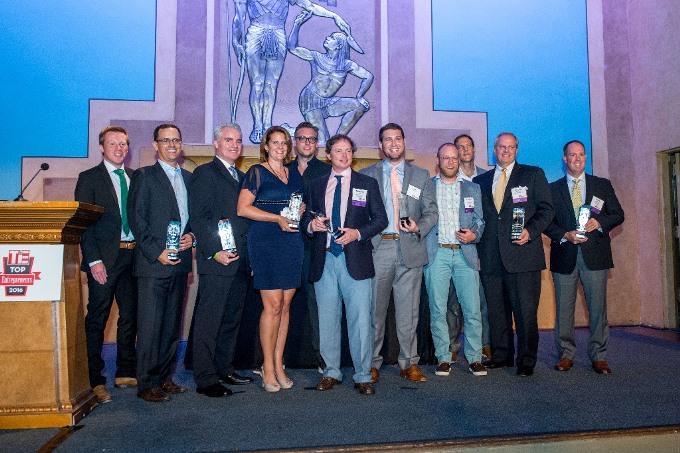 To be qualified for this honor, the nominee has to have been in business on January 1, 2012 or before and had a minimum of $2 million and no more than $100 million in 2015 revenue. After entrepreneurs are nominated and their company revenue criteria is met, an intense in-person interview is arranged between a CPA from awards sponsor, Warren Averett, and the entrepreneur. Together, they take a deeper dive into the origin of the company’s growth, profitability, sustainability, and gain insight into the nominee’s strategy for success, management style, innovation, and culture. These qualities play into an overall evaluation and ultimate ranking of the company among the entire pool of nominees. The winner for the upper middle market segment was Alpha Insulation & Waterproofing, a national leader in commercial insulation, waterproofing, spray fireproofing, spray foam insulation, and restoration. The winner for the middle market category was MacStadium, world’s largest hosting provider of dedicated Apple Mac computers with dedicated server rentals, colocation, and Mac Pro private clouds. Event coordinator lead and founder of Association Planners of Georgia (APG), Susan Stottlemeyer, added, “The awards process was flawless, so in tune and no missteps. The anticipation of who was the top entrepreneur in each category was one of the highlights!”

Special guests Indian Consul General Nagesh Singh and Ambassador Charles Shapiro graced the gala with their presence. Volunteers had time to host, eat, relax, and network. Lead volunteer Ravi Jha said, “So many cool, smart people in one room!” Dr. Sanjay Gupta and Jeff Arnold were very generous with their time and photo ops. Jen Martin Hall, VP of Communications at Sharecare, said, “Jeff shook every award honoree’s hand and never refused a picture with the audience. The same went for Sanjay. They both had a wonderful time!” With networking, education, and genuine camaraderie, gala goers were smiling ear to ear! Matthew Frooman, Partner, Warren Averett closed the night: “The level of genius between Jeff and Sanjay was mind blowing!” 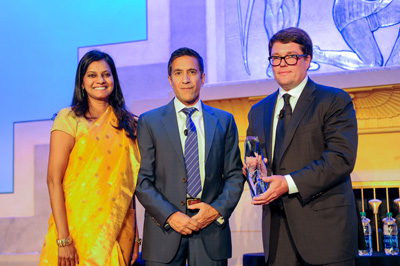 Dr. Sanjay Gupta - "What is your take on fear?"
Jeff Arnold - "I simply just don't operate with any fear."

"Culture of Sharecare is to put yourself in other people's shoes and create an empathy machine, not a sympathy machine."

"Failure isn't an option when the stakes are high."