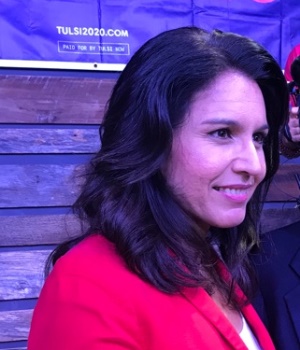 On Friday, August 30, 2019, on the eve of the Labor Day holiday weekend, and with less than 24 hours notice, a diverse group of over 300 people came out to welcome U.S. Representative Tulsi Gabbard (D – Hawaii) at her first Atlanta “town hall meeting,” her presidential campaign event held at the Atlanta Music Project building in Southwest Atlanta.

“Aloha!” is the word many associate with greeting, goodbye, or love. As the symbol of Hawaiian culture, it includes respect for one another, and living in harmony with everything. Tulsi talked about MLK’s values also, that hate cannot be overcome by hate but only by love, that darkness cannot be driven out except by light. Love and Light was the message she delivered, while sharing our current real problems.

Right at the outset, she made it very clear that her movement was about moving forward since much is at stake in America. She was not discouraged that she would not be appearing on the third debate stage. She encouraged everyone to be part of this movement so that it is “of the People, by the People, and for the People.”

Tulsi’s mission is Service above Self and People ahead of Politics. With her military experiences, she realizes the price of war—it is paid not only by military personnel and their families, but by everyone, since tax dollars are used for wars instead of for healthcare, education, and the economy. She would bring back the troops from Afghanistan where $4 billion per month is being spent on the military.

The audience, from different ethnic groups and age groups, expressed their admiration and appreciation that she focused on solutions rather than on pointing fingers at opponents. Her powerful speech of almost half an hour was followed by Q& A.

Atlanta Music Project is a unique nonprofit organization, where unprivileged kids get free music lessons as long as they commit to two hours every day of learning music. This helps them to develop discipline, commitment, and creativity, and gives them a life skill—goals that fit well with Tulsi’s military and political life.

She plans to return to Atlanta soon to generate energy to move forward on her path towards leading the nation as chief officer. At the end of the evening the room was charged with inspiration to see a candidate with values, determination, and compassion, and the discipline of duty to bring change through action.

[The article above is a Website Bonus Feature, appearing only on the website for October 2019, not in the print/digital issues.]