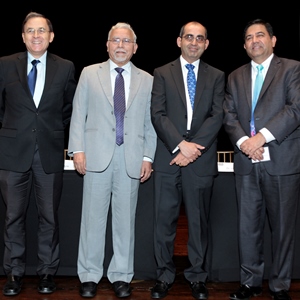 The 8th Annual USA India Business Summit (UIBS), conjoined with the 23rd annual Georgia Tech Global Business Forum, welcomed participants and delegates again to this annual landmark event in Georgia Tech on September 23, 2017. It was designed for all parties interested in the rapid growth of emerging markets as exemplified in the fast-changing economic environment of the largest emerging market: India. 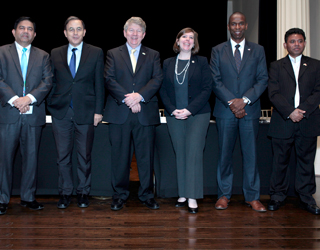 In the wake of several visits by Prime Minister Modi to the United States, the landscape governing US-India trade and investment relations has vastly improved and promises to be one of the most salient economic relationships in the immediate future. President Trump has offered a different vision of a geostrategic order for South Asia in which India would play a major keystone role. As India undertakes an ongoing process of reforms in its markets, their regulation, and access, the policy adopted by its government—termed “Chalein Saath Saath: Forward Together We Go”—is a direct signal that the US.-India broad-spectrum relationship is one of the keystones of the reform process in India. This annual summit therefore is in the very lines pursued in the bilateral relationship, building on growing and multiple pillars of mutual interest, broadly defined as economic growth opportunity; Trade and Agriculture; science and technology; innovation in key fields supported by the lofty UN Sustainable Development Goals, such as water, waste management, health, among others, underpinned by deepening ties in education and development; energy and meteorology; and strategic cooperation between the two giant economies.

Witness to this process are the bilateral trade levels between the United States and India which hover around $120 billion a year, registering a continuous growth while U.S. direct investments in India are evaluated at some $25 billion, representing almost 6% of the total FDI into India. It is precisely the nature of this investment strategy by leading U.S. firms and its very country origin which provide an additional support to the sustained high level of domestic fixed capital formation in India. At the same time, it must be noted that Indian investment in the U.S. has similarly risen; about eighty major Indian corporations have invested nearly $18 billion in the U.S. economy. The US remains the partner of choice for India for evident cultural, linguistic, and commercial reasons. The trend is under way and deserves a full measure of recognition. A negotiation is now under way between both countries to build the foundation of mechanisms to resolve divergences in the wake of rising commercial investments. Similarly, India is also engaged in an India-EU Free trade agreement process of negotiations to further solidify the diversity of its economic outlets and partnerships. 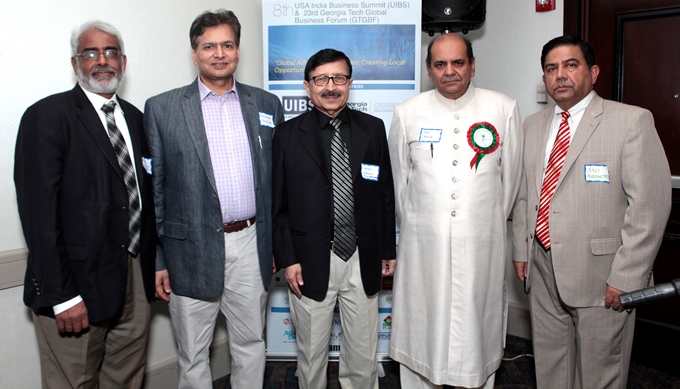 The sectors selected this year for focus include competing in a globalized world, higher education in the special relationship between the United States and India, techno entrepreneurship, the innovatory process in which both the United States and India have much to learn and gain from each other. This year UIBS morphed into a regional event conducted over three days. Keynotes were delivered by Devinder Ahuja, SVP, Chief Financial Officer, Novelis Inc. with title “Successfully Competing in a Globalized World” and Dr. Vijay Khole, Vice-Chancellor of Amity University, Mumbai, India with title "Indian Education System – Challenges & Opportunities."

According to keynote speaker Ahuja, we are living in a world marked by ever-accelerating pace of change and disruption driven by rapid innovation enabled by technology and communications. The Fortune 500 list of most valuable companies and Forbes most valuable brands is now dominated by names which were either insignificant or did not even exist one to two decades earlier. Knowledge companies are unseating those who had dominated the space for many decades. All the top names in the list have disrupted entire industries and forever redefined the rules of doing business.

On the political and economic side in the last two decades, global events of seismic proportions have come together to reshape the world we are living in. Continuous innovation, change and learning agility are differentiating the companies, countries and people who are leading versus those who are lagging. Not being at the forefront of change and innovation, both at an organizational and an individual level, is a sure shot recipe for losing relevance in the emerging world order.

The advent of disrupting technologies has had a significant impact in deepening India’ s integration in the global markets; build on India’s remarkable achievements in the information technology industry, going far beyond outsourcing and offering creative solutions to the challenges posed by the threats and risks of globally integrated flows, within the bounds of each nation’s interest. The process of major transformation like the Goods and Services Tax (GST) in India, the largest democracy in the world, is full of positive impacts and opportunities for U.S. firms in which all parties are engaged in a positive-sum process of mutual benefits in trade, investment, and innovation. This is so particularly for the Sunbelt states in which Atlanta sits at the heart of global regional economy. A process of reverse technology transfer is under way in which India’s “frugal” innovation process has plenty of lessons and opportunities for multiple industry sectors, including health care, and certainly all the sectors identified for consideration in this eighth annual USA India Business Summit.

The right time in India continues to be now; at the very moment the world economy may not have reached its expected levels of growth for year 2017 and as the rules of the game are being redefined. Indian markets are taking off with new actors in a fast reconfigured global economy.