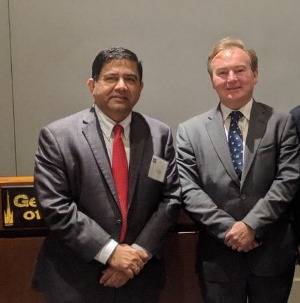 UIBS organized a next-generation seminar on “Disruptive Technologies: Implications for Global Workforce and Markets” on April 4, 2018 in the Technology Square Research Building (TSRB) of Georgia Tech. Focus areas or disruptive technologies that were covered were Mobile Technologies and Cloud Computing, Robotics and Automation, Artificial Intelligence & Machine Learning, and Internet of Things (IoT). The seminar’s central theme was to explore how the coming workforce will bear the onslaught of these disruptive technologies on skills preparedness, loss of jobs, and societal issues. In the late 80s and early 90s we used the internet sparingly, but today about one third to half of our work time is on the internet with smart phones or computers. Times are changing!

The inaugural speaker was Hon. Jeremy Pilmore-Bedford, HM Consul General of the United Kingdom of Great Britain and Northern Ireland. CG Pilmore-Bedford highlighted the UK’s prowess in FinTech and Artificial Intelligence technologies. Some of the leading British universities working in tech areas are the University of Cambridge, University of Oxford, and King’s College London.

Distinguished speaker Alain Louchez (left) gave a presentation on IoT and said that IoT will give rise to a world in constant change, i.e., a “pulsating world,” “pulsating” because things will continuously be sending and receiving data. One of his presentation slides quoted Nikola Tesla’s famous saying that “When wireless is perfectly applied, the whole earth will be converted into a huge brain, which in fact it is, all things being particles of a real and rhythmic whole.” Louchez ended his presentation saying that there is one meaningful conclusion: that we have no idea how many jobs will actually be lost to the march of automation in coming decades.

Mr. C. B. Velayuthan (right) from Nokia spoke of the pace at which Optical Networks, Broadband, and Super Computing are advancing, providing billions of users more speed and computational power. Concepts like “Smart Cities” are not too distant from our lives—when roads will communicate with autonomous vehicles, and our computers will be on walls like today’s electric sockets.

Dr. Suman Das (left), Founder/CEO of DDM Systems, Inc. gave a futuristic view of Advanced Manufacturing and 3D Printing. Using these technologies, companies can get parts and prototypes made in 1-3 days, saving millions of dollars and months of time to companies like GE and Boeing. Bioinspired Advanced Manufacturing and Micro/Nanoscale 3D printing will solve many mechanically and physically-complex biological challenges and deformities.

Other sessions considered the Impact of Artificial Intelligence, Machine Learning, Cloud Computing, and Artificial Intelligence (AI) on the future of work/work force. There was an interesting discussion about AI used in the field of Agriculture, or “Digital Agriculture.” According to Microsoft, thousands of Indian farmers in Andhra Pradesh and Karnataka get a text message before they sow their seeds. The SMS, delivered in Telugu and Kannada, tells them when to sow their groundnut crops. In dozens of villages in Telangana, Maharashtra, and Madhya Pradesh, farmers receive automated voice calls informing whether cotton crops are at risk of a pest attack, based on weather conditions and crop stage. Welcome to new age agriculture, where technologies like Artificial Intelligence (AI), Cloud Machine Learning, Satellite Imagery, and advanced analytics are empowering small-holder farmers to increase their productivity and income today by 30%!