UN’s International Day of Nonviolence observed at the MLK Center 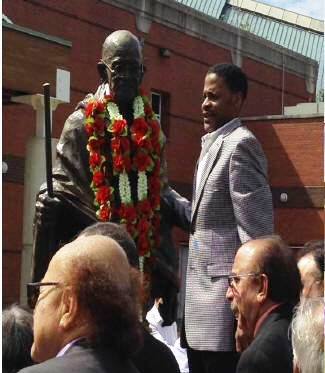 It feels like a long time ago but it was only on June 15, 2007 that the United Nations unanimously adopted and passed a resolution by the 192 member Board, observing October 2 each year as the International Day of Nonviolence. The Gandhi Foundation of USA (GFUSA) celebrates Gandhi Day and King Day each year.

Officer Marie Hayden of the National Park Service set up the podium, Indian and American flags, chairs, and refreshments including a giant birthday cake. Peace-believers included dignitaries, King family members, and core die-hard volunteers of many causes, all gathered for the Mahatma’s 148th birth anniversary. This year was especially important because Dr. Christine King Farris, eldest sister to Dr. Martin Luther King, Jr, celebrated her ninetieth birthday on September 11 and was invited to attend. Unfortunately, she was unable to make it, but her son and Dr. King’s nephew, Mr. Isaac Newton Farris, former CEO of the King Center, was present.

Consul General Nagesh Singh and Consul D. V. Singh attended. Another guest was Darlene Rodriguez (pictured left with Viren Mayani), a regular guest on SuperQ 1300 AM, 1010 AM La Vida, and more, who has worked with religious groups, teachers, activists, human rights groups, artists, and individuals from all backgrounds to enhance the quality of life for Hispanic Americans.

GFUSA Chairman Subash Razdan and Executive Director Antony Thaliath welcomed all. Garlands or bouquets were placed at the Gandhi statue by Consul General Singh, Mr. Isaac Farris, Shailesh Lakhtakia, Ms. Rodriguez, and others. A solemn moment of silence was held for the victims and survivors of the USA's worst recent mass shooting in Las Vegas on the evening before, plus in support of those displaced by recent category-5 Hurricanes Harvey, Irma, and Maria (respectively delivering great damage to Metro-Houston, Florida, Georgia, West Indies, Cuba, Puerto Rico, and other impacted islands). Reverend Younis Farhat of the First Asian Indian Baptist Church of Metro Atlanta led the invocation. 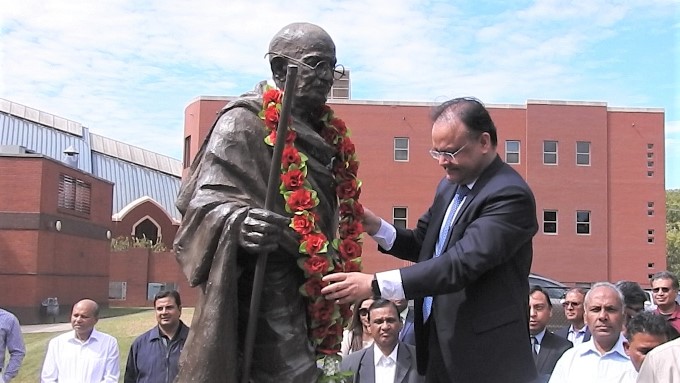 The Consul General spoke about the importance and relevance of such celebrations. He mentioned that peace needs a face for high visibility, especially with events such as the one that occurred in Las Vegas, with the murder of innocents with an automatic weapon. He pledged support for GFUSA, whose 20th anniversary of the dedication of the Gandhi statue is next year. And 2019 is the 150th birth anniversary of Gandhi. Mr. Farris spoke about the reverence that Dr. King displayed for Gandhi and how it shaped his life in bringing about a dynamic change and freedom for his people, without a single bullet fired and simply by displaying passive resistance/civil disobedience.

Atlanta lawyer Neera Behl and singer Laxmi Rao sang two of Gandhi’s famous hymns “Vaishnav jan to” and “Raghupati Raghav” with the crowd joining in. Mr. Farris led in making a chain by holding hands and singing, “We shall overcome.” 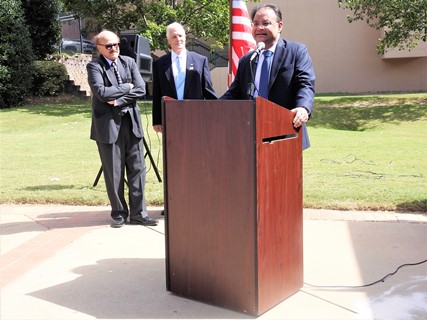 John Naugle, a GFUSA Board Member, strong peace activist, and founder of “Atlanta: City of Peace,” spoke of the observance of Dr. Christine King Farris’ ninetieth birthday and her contributions in education through authoring several books and teaching at Spelman College.

Mr. Greg Pridgeon, GFUSA’s Vice Chairman and a long time Gandhi champion, spoke eloquently about his working with the Indian-American community over the decades and the kinship he felt with its people. As Chief of Staff to Mayor Franklin, he too welcomed all to the City of Atlanta and the King Center.

All were invited to sing Happy Birthday, not only for Gandhi and Dr. Christine King Farris, but also for India’s 2nd Prime Minister post-Independence, Lal Bahadur Shastri, and several local community members. Everyone enjoyed refreshments catered by Swapna Indian restaurant, courtesy of Manoj Bhatia, as well as the birthday cake.

This annual ritual gets even more relevant and important, each day, with the increase in hate crimes across the globe and decreasing levels of tolerance amongst humans. 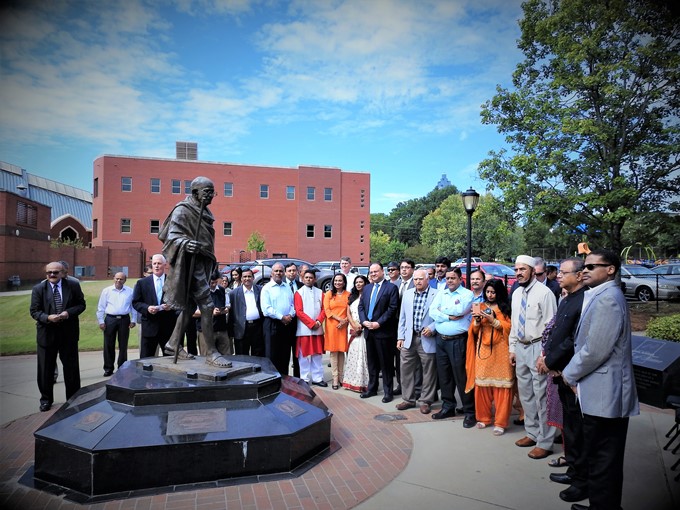