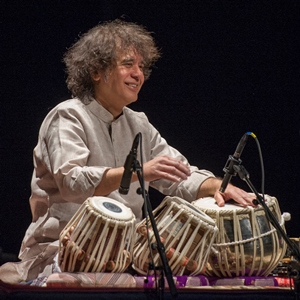 India’s undisputed global cultural ambassador, tabla nawaaz Ustad Zakir Hussain has done it all. Exceeding his late father’s (Ustad Allah Rakha) supreme legacy of tabla playing, he has acted in Hollywood films, given music in Bollywood and Hollywood films, composed music for the Olympics, and won several awards including the Grammy. His youthful charm continues to draw packed houses to his concerts. Humble and very actively “paying it forward,” the master instructor Zakirbhai hosts tabla workshops for students every time he visits Georgia State University.

Making the Rialto home for his Atlanta concert series, he was relaxed and ready for the Sunday April 10, 2016 afternoon performance, despite having driven the whole night from Florida, after a tremendous show the night before. “It’s my commitment to the Rialto and my loyal Atlanta concert attendees, whom I dare not fail, just in case the flight leaves late or does not arrive on time. To avoid that chaos I drove the whole night and stopped only to switch drivers for a bit, to make it here on time and ready to show.” What incredible diligence and love for the art and the audience!

Rialto’s Executive Director Leslie Gordon introduced India’s Consul General, Hon. Nagesh Singh, and in a few words Nagesh. Singh conveyed his gratitude to the cultural titan for making India shine and said that his family and he delightfully looked forward to hearing him. Maestro Zakir Hussain thanked the audience and gave a brief idea of what to expect in the minutes that would follow. 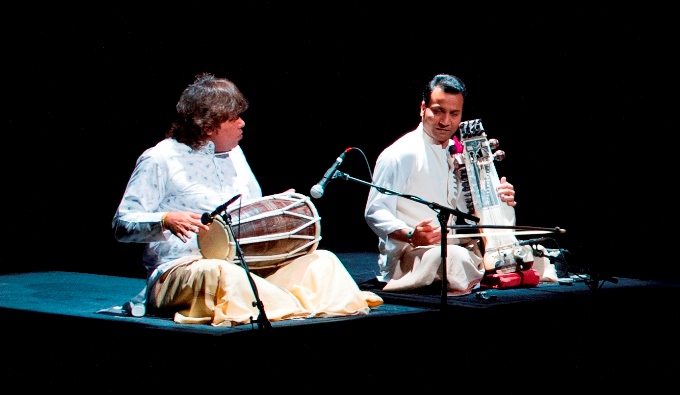 Navin Sharma on the dholak, and Sabir Khan on the sarangi. (Photo: Judy Ondrey)

Zakir had performed often with the illustrious Sultan Khan on the sarangi, and now life came full circle as the son Sabir Khan was to join Zakir. Opening the act, Sabir Khan walked amidst the audience and ascended the stage whilst singing the most memorable and loved Rajasthani folk song, “Kesariya Balam Aavo ni Padharo Mhare Desh”….which led to the quick addition of Navin Sharma on the dholak. The two regaled the audience with melodious jugalbandi based on the Rajasthani folk music before Zakirbhai joined in on the tabla and then the stage was conquered. The rustic notes of the singing sarangi combined with the crisp beats on the dholak and the effervescent fingering on the tabla was simply fantastic. Playing to the nuances of folk rhythms, Zakirbhai played to people’s heart’s content. 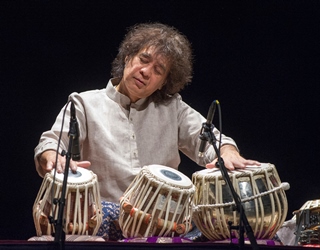 Joining the orchestra crew on stage next, was Anantha Krishnan on the mridangam. “I had the good fortune of learning the mridangam under the tutelage of his father, and I am so proud to perform with the prodigal son, on stage, this time around,” said Zakirbhai. The ebb and flow of the counts back and forth between the 3 of them made everyone wish the night would never end. As Zakirbhai is known to do, he explained how it was mandatory to speak the tabla count harmoniously as practice, before playing. He recited a whole verse about inviting people to his house, asking them to relax, have some tea, and leave, kindly making way for others. After speaking the bol he played the same on the tabla, exacting the expression, making the audience feel as if the instrument was talking!

He also narrated a deer in pursuit of food and how he would behave, creating an astounding environment. The audience lapped up every bit. 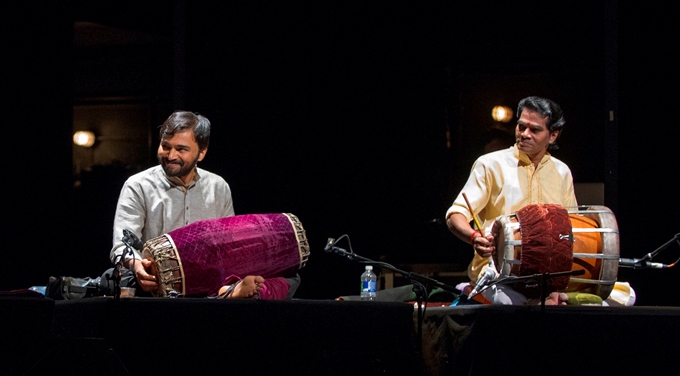 Anantha Krishnan on the mridangam, and Mannargudi Vasudevan on the thavil. (Photo: Judy Ondrey)

The last performer to ascend the stage was Mannargudi Vasudevan on the thavil. “I don’t wish to upset Mannargudi and earn his wrath, only to be slapped with the metal fingertips a thavil player uses to accentuate and amplify drumming on its one hard surface,” joked Zakirbhai.

All five of them played in jugalbandi together until the end. The audience was completely moved and gave a standing ovation to the Maestro and the other Masters of Percussion. The entire recital had been a nonstop roar of applause, without any breaks for the artists or audience—simply spellbinding.

As all good things come to an end earlier than wished, this one did, too. Until next time….. the wonder will have to wait!