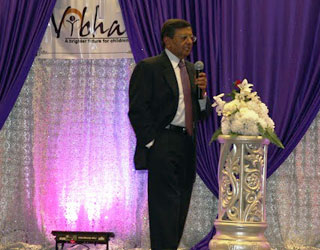 “You have an obligation to the community. As you succeed, you must find other people and bring up their potential,” said Prof. Sheth. That, in one sentence, brought home the perspective for the evening.

Having exceeded its goals both in Atlanta and nationally, Vibha organized a Thank-A-Thon on December 8th at the Forsyth Conference Center.

“There are two primary reasons for organizing this Thank-A-Thon event. We wanted to sincerely appreciate the sponsors and the donors for believing and supporting us for so many years in making a difference in the lives of underprivileged children. We also wanted to apprise them of how their donations are put to good use, and the future direction of Vibha,” said Srinivas Vemulapalli, the National Executive for Volunteer Relations and the coordinator of the event.

Kannan Udayarajan, the National Executive for Fundraising Events, highlighted that in the past 20 years, Vibha has raised more than 10 million dollars, through more than 250 grassroots organizations, reaching more than 250,000 children. “In the past few years, Vibha is increasingly taking on the role of being a Social Venture Capital Organization.

We identify scalable and replicable models that solve systemic problems and invest increasingly in spreading the models in other parts of India,” said Mr. Udayarajan. Vibha identified Sikshana—a model for the public schools system that improves their performance through motivational parameters for students and teachers—as a scalable model and replicated it in Andhra Pradesh, Gujarat, and Maharashtra. Vibha also promoted it and sought funding from other foundations, e.g. UNICEF. This helped Sikshana to scale from 15 schools in 2006 to 1,115 schools in 2012, and Vibha itself is funding 200 of these schools. Similarly, it is replicating Door Step School (DSS) of Pune, which takes school to the doorsteps of children of migrant construction workers. A number of donors commented that Vibha’s approach is different from many organizations and appreciated its efficiency.

Chief Guest, Prof. Jagdish Sheth, a renowned scholar and world authority in the field of marketing, delivered the keynote speech on the “U.S. economy and its global competitiveness.” With historical perspective, anecdotes, and future predictions, he reaffirmed the resiliency of the US economy. In an engaging session, the best moment of the evening came in an exchange between Prof. Sheth and Satya Jella, a 12-year-old student. In response to his question on “What should the next generation do to live the American Dream,” Prof. Sheth impressed the young man to work hard. He further highlighted the need to nurture the human potential and said that the value-add in the case of polishing that potential is infinite (in comparison to the 20-fold value-add for polishing a diamond). “You have an obligation to the community. As you succeed, you must find other people and bring up their potential,” said Prof. Sheth. That, in one sentence, brought home the perspective for the evening.

Vibha promotes the concept of volunteering, in all age groups from middle school students to retired professionals. “Similarly, Vibha also promotes the concept of ‘giving’ in the Indian community,” said Anoop Sinha, the Atlanta Action Center Coordinator, as he welcomed Mr. Robert Smulian, Vice President of The Community Foundation for Greater Atlanta. Mr. Smulian gave an overview of how community foundations are structured and how this Community Foundation is serving in 23 counties in the area.

A cultural program was coordinated by Madhavi Korrapati, with representation from the best dance schools in Atlanta—Geet-Rung School of Dance and Music; Academy of Kuchipudi Dance; Smt. Indrani Kar; and Planet U Performing Arts, Bollywood dance school.

As the year came to a close, volunteers were already busy with plans for 2013, starting with Dream Play (table tennis, chess, and art) on February 16. To volunteer, please email vibha-atlanta-volunteer-mgmt@googlegroups.com.