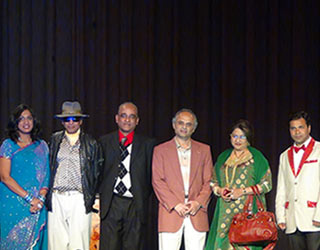 The indomitable spirit of ‘the Elvis of India’ came alive at Yaahooo, a music program held in memory of Bollywood’s ‘Greatest Dancing Hero’ and the icon of the Kapoor clan—the late Shammi Kapoor, who passed away on August 14, 2011 from renal failure, cheerful and brave to the end. His romantic and comic playboy character in films was beloved for being charming, energizing, and great fun. The program also raised funds for Georgia Legal Services Program, Inc., a nonprofit agency of the State Bar of Georgia, to provide legal services to low income Georgians.

The singing cohorts, Udai Singh, Amit Dave, Rajen Raval, Rekha Radhakrishnan, Shyam Gupta, and Laxmi Rao belted out the choicest solo and duet songs from the treasure chest of Shammi Kapoor’s dancing library. Most songs were happy, foot-tapping numbers, keeping the engaged crowd clapping and dancing in front of and on stage.

Everyone was invited to clap, dance, and have fun. The songs were truly reminiscent of this legend, unparalleled in Indian cinema. The combination of Mohammad Rafi and Shammi Kapoor will live on forever for Indians around the world.


Link:
Another Lakshmi Rao, Sudha (Lakshmi) Rao of New England, has an article with interesting comments on the songs below, as well as others.
http://www.lokvani.com/lokvani/article.php?article_id=7518

*Videos of some songs mentioned in the report above:
“Aaj ke tere mere” (1968) from Brahmachari
http://www.youtube.com/watch?v=IhkVnMIByAA