COVID-19  In-depth info for Indians in Atlanta/Georgia. Click here
Home > Magazine > Around Town > Yellow Saris and Haathe Khori at Puja for the Goddess of Learning 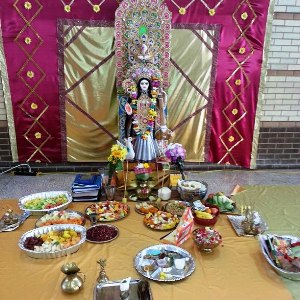 Goddess Saraswati, with her swan and veena, is greeted by the sound of shank and the taste of prasad at the puja and Haathe Khori during Purbasha's celebrations on February 16, 2013. (Photo: Biplab Biswas)

A 200-strong crowd of devotees from the Atlanta area and neighboring states gathered at Meadow Creek High School to offer prayers to the Mother Goddess Saraswati (the goddess of learning, or of knowledge and the creative arts). The event was Purbasha’s third Saraswati Puja, on 16th February, 2013.

Puja began around noon with devotees dressed in yellow attire, which is a tradition for Basant Panchami. The atmosphere was charged with the sound of chants as devotees gathered to offer pushpanjali (flower offering) and prayers to Maa Saraswati. Distribution of prasad (food first offered and then consumed with the deity's blessing) was followed by lunch—without which no Purbasha event is complete!

This puja is especially engaging for children. Small ones about to begin school participate in the ceremony of Haathe Khori (the beginning of writing). Kids are also the major part of the program: they participated in an art competition, a "go as you like" (in which children dress as a character and make a short presentation on stage), and quiz contests. Enthralling the crowd, children's performances included singing, playing instruments, and recitation.