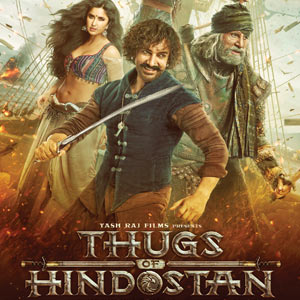 So, India’s answer to Pirates of the Caribbean is finally here… but this one is a sinking ship! A shame really, as it had all the ingredients for an epic adventure: two stalwarts—Amitabh Bachchan and Aamir Khan—together on screen for the first time, and thrilling action on the high seas. But alas, all this is held together by a trite, outdated script, and barring some action sequences that are nicely mounted and executed, the rest of the film is a tedious affair, which even the superstar leads cannot salvage.

Based on Philip Meadows Taylor’s novel Confessions of a Thug and set in the 18th century, this fact-meets-fiction drama is about a gang of rebels led by Khudabaksh aka Azaad (Amitabh Bachchan), trying to win back their kingdom of Raunakpur from the British East India Company. The British, on their part, hire the film’s most colorful character, Firangi Mallah (Aamir Khan) to infiltrate the rebel group, and we are never quite sure which side this charming, double-crossing rogue is on!

Bachchan is convincing in the action bits, but you can barely see the expressions on his face, what with his long tresses and facial hair covering most of it. Fatima Sana Shaikh, too, is pretty good in the action scenes but is at sea in the emotional ones. Katrina Kaif is there for precisely three scenes, out of them two songs! Only Aamir Khan seems to be having fun here as the wily and garrulous Firangi, but he ends up no more than a caricature. 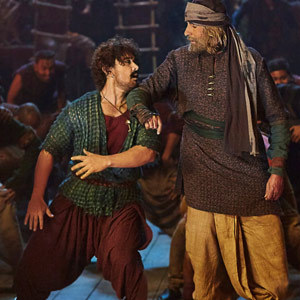