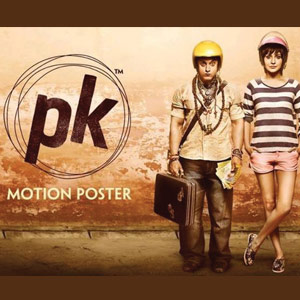 PK the protagonist steals your heart with his naiveté and childlike curiosity, but PK the film just stops short of being a winner, mainly because of a somewhat contrived second half. That apart, Rajkumar Hirani does a clap-worthy job of questioning India’s societal and religious structures that encourage bigotry, through an outsider, an alien to be precise, without sounding preachy or harsh, and with oodles of humor, to boot.

In an absolutely terrific first half, the film follows PK’s (Aamir Khan in spectacular form) journey in India, after he is left stranded on planet Earth, in Rajasthan, because someone steals his remote. PK quickly fits in with the humans by acquiring their ways, even learning Bhojpuri in the quirkiest of circumstances. The action shifts to Delhi where a frantic PK goes in search of his stolen gadget. The script sparkles in these scenes which are rich in irony.

Meanwhile, a plucky television reporter Jagat Janani, Jaggu for short (Anushka Sharma) chances upon PK, is intrigued by him, eventually befriends him, and then orchestrates a faceoff between PK and the self-styled godman, Tapasvi Maharaj in a bid to expose the so-called spiritual guru.

All the actors are in fine nick. The very likeable Sushant Singh Rajput, playing Jaggu’s Pakistani boyfriend Sarfaraz, has only a cameo but he leaves his mark. Saurabh Shukla as the godman is simply superb and the spirited Anushka holds her own against Aamir. 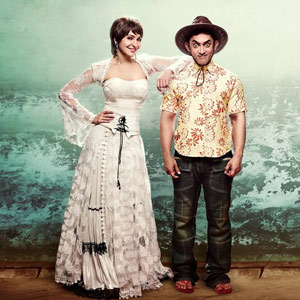