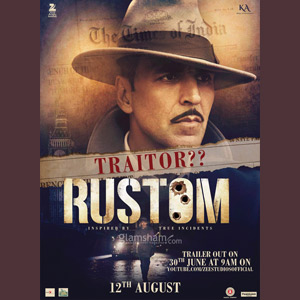 Rustom is inspired by the sensational K. M. Nanavati case of 1959 which captured the imagination of the entire country. While the facts were inherently fascinating and dramatic enough to make a compelling film, alas, what we get in Rustom is a facile, half-baked drama with dollops of fiction. Still, the movie makes for a decent weekend watch.

A handsome naval officer, Rustom Pavri (Akshay Kumar) comes home after an assignment to discover that his beautiful wife Cynthia (Ileana D’Cruz) is having an affair with his friend, the wealthy Casanova, Vikram Makhija (Arjan Bajwa). Just as Nanavati did in real life, Rustom pumps three bullets into the man’s chest and then proceeds to surrender. He is tried before a jury....

After an almost inert first half which does have its moments, Rustom picks up in the second half, with its courtroom drama. However, these scenes could have been more riveting had they not dragged on at some places. The talented Kumud Mishra, in a role inspired by Blitz editor R. K. Karanjia, shows up purely to provide comic relief!

Honestly, the only thing Parsi about Akshay is the name Rustom! Still, he cuts a dashing figure in his uniform, and it is heartening to see the hero play a man who is so evolved that he forgives his errant wife. The women, Ileana D’Cruz and Esha Gupta, playing Vikram’s revenge-seeking sister Preeti, flit around in fashions of the 50s. 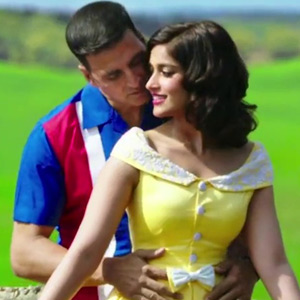