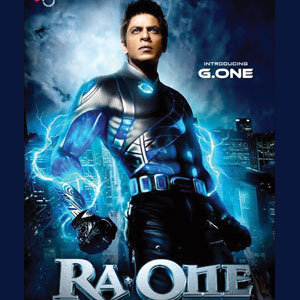 So Shah Rukh Khan’s ambitious superhero project is ﬁnally here, but is it worth the wait? Well, to some extent, yes. The jaw-dropping action sequences and the special effects make it paisa vasool entertainment for some in the audience, but the weak screenplay, disjointed narrative at places, horrible humor and sexual innuendos detract from the overall impact this sci-ﬁ extravaganza could have made. There’s lots of sound and fury signifying almost nothing. Having said this, the sheer effort that has gone into the making of the ﬁlm is something that deserves to be lauded.

A techie father, Shekhar Subramaniam (Shah Rukh Khan sporting a terrible wig of ﬂoppy curls), in a bid to earn his son’s love and respect, creates the ultimate computer game in which the baddie Ra. One (Arjun Rampal) is more powerful than the hero G. One (also SRK, sans curls). Havoc ensues when Ra. One breaks into the real world and is hell-bent on killing Prateik, which sends the boy and his mother (Kareena Kapoor) to India with G. One as their guardian angel. You see, he has also come to life by then.

Shah Rukh gives it his best shot, Arjun Rampal with his brooding looks makes a menacing villain though he is given very little screen time, and Kareena Kapoor is striking in looks as well as acting.

The Chammak Challo number with dazzling Kareena gyrating sensuously looks fabulous on the big screen, and Senegalese-American singer Akon singing in Hindi sounds endearingly charming. To sum up, Ra. One is a humongous opportunity gone waste.