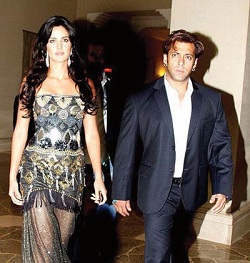 Salman, Katrina no longer a couple

It’s official. After months of speculations and rumors, it is now clear that Salman Khan and his long-time girlfriend Katrina Kaif have split. Salman finally admitted as much in a recent television interview. He added, however, that it wasn’t a bitter break-up and they were still friends. Sallu has been linked to Zarine Khan, Sonakshi Sinha and Kangana Ranaut in the past few weeks, but it is Zarine that he is said to be closest to.

Predictably, rumors of the Ranbir-Katrina closeness have resurfaced. The couple were spotted at a hotel in New Delhi in July, later in London and are all set to embark on a 16-city U.S. tour. Being organised by Ranbir’s dad Rishi Kapoor, the concert will feature a host of other Bollywood celebs.

After Madhuri Dixit backed out of the project due to personal reasons, rumor has it that Priyanka Chopra has been approached to play Indira Gandhi in Krishna Shah’s biopic on the late leader, Mother: The Indira Gandhi Story. Apparently, Shah feels that Priyanka’s face can be worked upon to make her look like Indira Gandhi. Also, she has the versatility to play the role with all its complexities and nuances.

Meanwhile, looks like Priyanka and Shahid Kapoor are getting back together. Shahid was recently spotted dropping Piggy Chops at the airport well past midnight, despite their desperate attempts to elude the media. Priyanka was leaving for Brazil for a shoot of her new reality show on television.

It couldn’t get bigger than this. Buzz is that the flamboyant filmmaker Vidhu Vinod Chopra, flushed with the success of 3 Idiots, has roped in Hollywood superstar Nicolas Cage for his new film, Broken Horses. To be shot in the U.S. with the drug war on the U.S.-Mexico border as its backdrop, this will be Chopra’s first English film. Another Hollywood actor, Mickey Rourke, is also said to have been approached for the project. Chopra is in Los Angeles these days finalising details of cast and crew.

After living in for two years with Ranvir Shorey and yet never really acknowledging the relationship, Konkona Sen Sharma chose to announce her marriage on the micro-blogging site, Twitter. Ranvir and she exchanged marriage vows at their Goregaon residence in Mumbai on September 3 in an extremely private function attended only by close family members and actress Koel Purie. The ceremony was apparently an interesting blend of Bengali and Punjabi traditions.

Konkona brings to mind Nandita Das, who became the proud mother of a baby boy on August 11. The actress-turned-director married industrialist Subodh Maskara in January this year.