COVID-19  In-depth info for Indians in Atlanta/Georgia. Click here
Home > Magazine > Bollywood Buzz > SRK, Salman hug each other, but have they patched up?

SRK, Salman hug each other, but have they patched up? 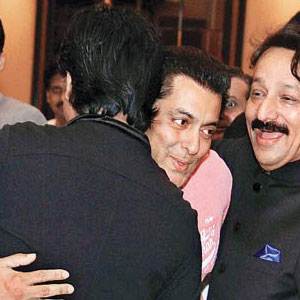 The impossible happened at an iftar party hosted by a political leader in Mumbai on July 21. Arch rivals Shah Rukh Khan and Salman Khan hugged each other and lensmen went wild freezing the moment for eternity. Apparently, when the host escorted Salman to where SRK was seated, there was an awkward silence as the two superstars faced each other, and then Salman extended his hand, greeted Shah Rukh and hugged him.

But while the media went berserk announcing that the two actors had finally buried the hatchet after five long years, SRK and Sallu maintained a stoic silence. Not wanting to embarrass the host, they had only put up a façade of civility. Yes, the feud remains.