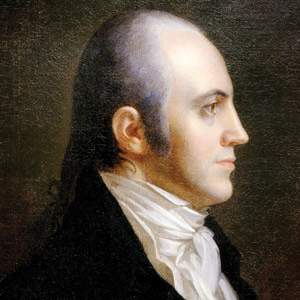 Not many people know that Burr fathered two children with a woman from Calcutta, India, named Mary Emmons (also known as Eugénie Beauharnais or Bearhani), who worked for his family as a maid and came to America through the Caribbean.

That Burr produced two children of color, abolitionist John Pierre Burr and Charlotte Louisa, was largely unrecognized until Sherri Burr, a law professor emeritus at the University of New Mexico, and a descendant of John Pierre Burr, conducted extensive research, including DNA tests.

In September, she presented her research at the Aaron Burr Association’s annual meeting and the association voted unanimously to officially recognize John Pierre Burr and Charlotte Louisa as Aaron Burr’s children. Both children married into African-American families, producing a line of descendants who can now trace their roots to Aaron Burr and Mary Emmons.

Thanks to Sherri Burr’s efforts, John Pierre Burr’s previously unmarked grave now has a tombstone that reveals not just his relationship to the third vice president, but also his work as a conductor in the Underground Railroad.

Sherri Burr told CNN that it was important for her “to make sure John Pierre got recognized, because he was such an important advocate for eliminating slavery.”