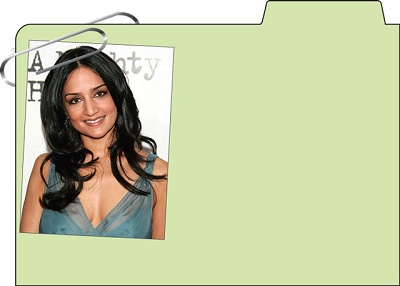 PANJABI BY THE NUMBERS

“It was a complete shock (winning an Emmy). I was up against five very talented and established actresses ... but it was a well-received shock. The best way to describe it is to compare it to a child's first trip to Disneyland." (The Guardian)

“Since I was a baby, my goal was to be on TV because film was just impossible -- you never got any Asian women in Western cinema.” (London Daily Mail)

“I'd love to do a romantic comedy. And perhaps, if the character was right and I had a good gut instinct, a Bollywood movie." (The Guardian)

Archana “Archie” Panjabi was born in London to immigrants from India. Her father, Govind, operated a restaurant, while her mother, Padma, was a special-needs teacher.

Following high school, she earned a bachelor’s degree in management studies from Brunel University in West London (thus satisfying her parents), then set her sights on acting. She had dreamed of acting in the British soap EastEnders, but her audition for a role was unsuccessful. Not long afterwards, however, she landed her first major role -- in the 1999 movie East is East.

Her other film roles include Bend It Like Beckham (2002), The Constant Gardener (2005) and A Mighty Heart (2007), for which she won The Chopard Trophy at the Cannes Film Festival.

Last year, she joined the cast of the CBC series The Good Wife, playing the role of Kalinda Sharma, and recently won a Primetime Emmy Award for Outstanding Supporting Actress in a Drama Series.

At the age of 26, Panjabi agreed to an arranged marriage, tying the knot with tailor Rajesh Nihalani. She hasn’t regretted it.

“There is a big misconception about arranged marriage,” she has said. “Yes, it can mean that you meet someone and then have to marry them, but this was my mother saying, ‘I'm going to introduce you to so-and-so. If you don't like them, fair enough.’ At the time it brought out my rebellious streak because I thought her taste in men was not going to be like mine. But at the end of the day, she knows me better than anybody.”