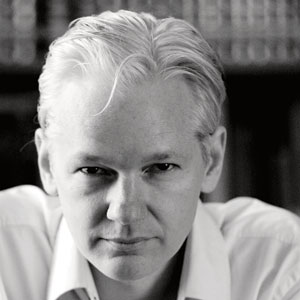 Uttar Pradesh Chief Minister Mayawati isn’t happy with WikiLeaks and its founder Julian Assange, after the whistle-blowing website disclosed a U.S. diplomatic cable from 2008 that includes an allegation that “when she needed new sandals, her private jet ﬂew empty to Mumbai to retrieve her preferred brand.”

Mayawati charged that Assange had gone mad. “I request the government of his country to send him to a mental asylum and in case they are all full, I will make space for him in the mental asylum in Agra,” she said.

In response, Assange expressed willingness to seek asylum in India, but not for mental illness, according to a BBC report. Noting that he had been held under house arrest in the UK, he said he “would be happy to accept asylum, political asylum, in India—a nation I love. In return, I will bring Mayawati a range of the ﬁnest British footwear.”

A range of footwear? He’d better hope he’s as good at dodging them as George W. Bush.

Did the American Civil War play a role in the invention of pav bhaji in Bombay? That’s what Aakar Patel suggests in his fortnightly column in the ﬁnancial newspaper Mint. When Abraham Lincoln ordered a blockade of Southern ports, it resulted in a shortage of cotton around the world. Gujarati merchants seized the opportunity to supply cotton to the West and worked late into the night to meet the demand. They were hungry when they were done, but their wives were asleep.

“This demand for regular food at an unusual time created a unique supply,” Patel writes. “The traders were served by street stalls that invented a late-night special: pav bhaji. This is mashed vegetables (all the leftovers) cooked in a tomato gravy and served with buttered loaves.”

If you think that’s the only connection between Lincoln and pav bhaji, then you probably haven’t seen the Gujarati merchant eating a pav bhaji while sitting in the backseat of his Lincoln Town Car.
BRIBING FOR GOOD HEALTH
Incentives for family planning and sterilization are commonplace in India, and MIT economist Esther Duﬂo would like to see it expanded to child vaccinations.

As reported by Anya Kamenetz in Fast Company, Duﬂo’s research found that when shots were readily available in Rajasthani villages, the immunization rate increased from 2 percent to 18 percent. But with incentives, the rate jumped to 38 percent. Parents were offered a free kilo of lentils whenever they brought their child for a shot and a set of plates when the child completed a full series of shots.

Indian government ofﬁcials are still reluctant to offer incentives. Perhaps Duﬂo should offer them a set of plates.