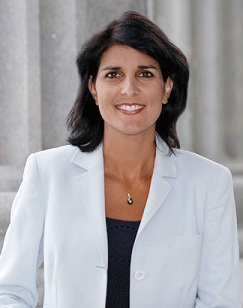 DID THAT REALLY HAPPEN?
1. A 16-year-old Delhi boy became the youngest person to climb Mount Everest, only to have the record broken by a 13-year-old American a few hours later.
2. A Mumbai woman who used hidden-camera footage of dowry demands to have her prospective groom and his father arrested was flooded with marriage proposals from all over India.
3. The BP oil spill caused a spike in traffic to the website www.BobbyJindal2012.com.
4. Indian Americans won both the National Spelling Bee and National Geographic Bee for the second time in three years.
5. A blogger accused South Carolina gubernatorial candidate Nikki Haley of exchanging text messages with Tiger Woods.
(1,2 and 4 really happened.)

ANAMIKA OUTDOES LEBRON
The drought is over for the city of Cleveland, thanks to Anamika Veeramani. As Stephen Koff of the Cleveland Plain Dealer wrote, the 14-year-old “did what the Cleveland Browns, Indians and Cavaliers haven't been able to do in the past 46 years.”
In becoming the eighth Indian-American to win the National Spelling Bee in the last 12 years and the third in a row, Anamika became the toast of Cleveland, with some comments on the Plain Dealer’s website comparing her to basketball star LeBron James, a free agent likely to leave Cleveland.
“Go LeAnamika!” said one commenter. “A national championship for northeast Ohio! Please don't leave!”


Said another: “Hooray for Anamika! She can spell championship! Can LeBron? Word is Anamika's free agency tour of private high schools begins July 1.”

BHANGRA YOUR WAY TO ROMANCE
In a Huffington Post article called “How to Date an Indian (Advice for the Non-Indian), Andrea Miller, whose husband is from Delhi, describes why Indians are desirable and how to go about dating them.
“There are obvious reasons one would want to date an Indian, such as how successful and professionally desirable they are,” she writes. “Indians dominate as engineers, doctors, lawyers, venture capitalists and entrepreneurs. They make up a large proportion of our graduate students -- just walk around the campuses of Harvard, Columbia or Stanford or and you will see these incredibly attractive brown people all over the place. Which leads to point number two. Indian people tend to be really good looking.”
If you want to date an Indian, “you need to be on your game,” according to Miller, who offers several tips, including having a favorite Bollywood actor and learning Bhangra.
“Showing an appreciation for Bhangra will score you points,” she writes. “Finding a place that plays Bhangra music and going there together is sure to get you something straight from the Kama Sutra, especially if you exhibit the right dance moves, i.e. patting an imaginary dog while screwing in an imaginary light bulb.”
So that’s how you woo an Indian!

[Comments? Contributions? We would love to hear from you about Chai Time. If you have contributions, please email us at melvin@melvindurai.com. We welcome jokes, quotes, online clips