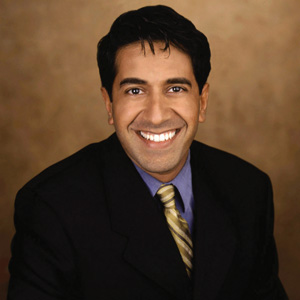 Memo to News Production Staff, CNN
From Ken Jautz, Executive Vice President
Just want to congratulate you on following the recommendations I made in my previous memo, particularly the need to give our viewers more opportunities to benefi t from Dr. Sanjay Gupta’s vast medical knowledge.

Sanjay is extremely popular with our viewers, not just women but also – and this shouldn’t surprise you – girls. And I’m not just referring to the Gupta Girls, his rabid fan club that’s almost twice as large as Cooper’s Crew and Blitzer’s Blondes.

Sanjay adds credibility to all our reporting and gives us a significant edge over MSNBC, FOX, and other networks. He’s so popular that some of our competitors have even tried to hire Sanjay Guptas of their own. “Sanjay” and “Gupta” are fairly common names among Indians, and, according to my intern, Rajeev, there are about 200,000 Sanjay Guptas in the world, of whom 2,532 are doctors. But we believe we have the best Dr. Sanjay Gupta in the world and need to protect him from imposters and impersonators. That’s why, from today onwards, we’re going to identify him on our broadcasts and digital platform as Dr. Sanjay Gupta®.

Just so we stay on the ball this year, I want to give you three examples of how Sanjay has been used effectively on two of our popular shows: The Situation Room with Wolf Blitzer and Anderson Cooper 360°.

Dec. 3, 2012. 5:20 p.m. EST
Wolf Blitzer: “We have some breaking news for you. Former Republican Party presidential nominee Mitt Romney has rejoined the Board of Directors of Marriott International. Let’s bring in our chief medical correspondent Dr. Sanjay Gupta to dissect this piece of news. Sanjay, any thoughts on what’s going on with Governor Romney?”

Gupta: “Well, Wolf, all evidence suggests that Governor Romney is suffering from PELD, which stands for post-election loss disorder. Most doctors would agree that anyone suffering from PELD should not sit home and be bored, but go out and sit on a board.”

Dec. 7, 2012. 4:13 p.m. EST
Blitzer: “The White House’s chief economist Alan Krueger has just issued a statement saying, ‘While more work remains to be done, today’s employment report provides further evidence that the U.S. economy is continuing to heal from the wounds infl icted by the worst downturn since the Great Depression.’ Let’s bring in our chief medical correspondent Dr. Sanjay Gupta. Sanjay, do you think the economy is healing from its wounds?”

Gupta: “Well, Wolf, if you just look at the symptoms, you may get the impression that the economy is on the path to a healthy recovery. But as doctors, we’re trained to not just treat the symptoms, which would only give us short-term relief, but to diagnose and treat the underlying problem. It doesn’t matter if the patient is suffering from Great Depression, or in this case, Manic Depression.”

Dec. 15, 2012. 8:36 p.m. EST
Anderson Cooper: “Korean singer PSY’s ‘Gangnam-style’ video has just crossed 1.7 billion views on YouTube. That would be like every single man, woman, child, and dog in India watching it. To help explain why ‘Gagnam-style’ was the most-watched video in 2012, let’s bring in our chief medical correspondent Dr. Sanjay Gupta. Sanjay, how do you explain PSY’s popularity?”

Gupta: “Well, Anderson, there are two things at play here. First, there is an aspect of this that can only be explained through PSY-chiatry. Many people who watch the video have delusions—they believe that unless they keep replaying it, PSY will step out of their screens and go all PSY-cho on them. Thankfully, this condition can be treated with PSY-chotropic drugs. Second, there is the viral nature of the videos. Unlike bacterial videos, viral videos are harder to treat. But people can get vaccinated against them—and I strongly advise everyone to visit their doctors and get themselves a PSY vaccine. Do it now before it’s too late!”