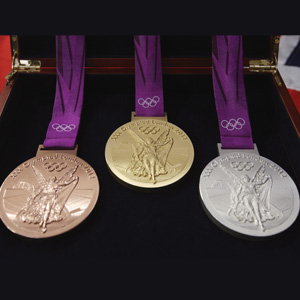 India is basking in the glory of its most successful Olympics campaign ever, with four of its athletes going home with bronze medals, two with silver medals, and one with Usain Bolt’s autograph.

India’s Sports Minister Ajay Maken congratulated the Olympic team on their “super success” at the London Olympics. “At a single Olympics, you have won more medals than at the previous three Olympics combined,” he said. “Thanks to you, we have gone from winning 20 Olympic medals in our history to 26, which means that India, in terms of world ranking, is now well-ahead of Michael Phelps.”

His reference to Phelps was a deliberate response to critics who had compared the American swimmer’s all-time record haul of 22 medals to that of India, whose athletes in previous decades would win a single medal at each Olympics with such regularity, many Indians believed there was a quota system in play. “It was never a question of whether we would win one medal,” said sports historian Abdul Ibrahim. “It was always a question of who would win that medal.”

Indian sports fans had brushed aside the comparison to Phelps, saying it didn’t bother them at all, but soon after wrestler Sushil Kumar won a silver medal, the 26th in the country’s history, thousands of ecstatic fans poured into the streets of New Delhi, some of them waving signs that said “Sorry, Michael Phelps – you’ll never catch India!” and “India leaves Michael Phelps in the dust.”

“Even those who did not win medals gave it their best effort and made us proud,” Maken said. “Two of our athletes reached the final in discus throw, two of our boxers came within one victory of winning a medal, and our field hockey team ... well, they were on time for all six matches.”

India has now won six medals in boxing and wrestling in its history, and would have won many more, experts believe, if not for Gandhi’s messages of nonviolence. “When Mary Kom won her medal in boxing, an American friend said to me, ‘Gandhi must be rolling in his grave,’” Ibrahim recalled. “And I said, ‘Well, it’s a good thing that he was cremated.’”

India even did well in a speed event in London, with Irfan Kolothum Thodi finishing in the top ten in the 20 km walk. A confident Thodi, who broke the Indian national record, threw out a challenge to Usain Bolt, the fastest man in the world: “You might be able to outrun me, Usain, but I can out-walk you. Just organize a walk. Anywhere, any place, I am ready for you.”

India’s medal winners were promptly rewarded with cash awards and promotions. Many of the country’s top athletes support themselves through government jobs. Kumar, the wrestler, works for Indian Railways, where he—appropriately enough—takes care of pins. Kom, a five-time world boxing champion, is a Deputy Superintendent of Police. She is occasionally called upon to interrogate suspects, but they usually confess before they get to meet her.

Sports Minister Maken was in such a celebratory mood after the Olympics that he even extended warm wishes to Madhura Nagendra, the Olympic gatecrasher who walked with the Indian team at the opening ceremony. “We did so well at the London Olympics that we have invited her to walk with us again in four years.”