Desi Satire: Moving Can Be a Tail-Wagging Experience 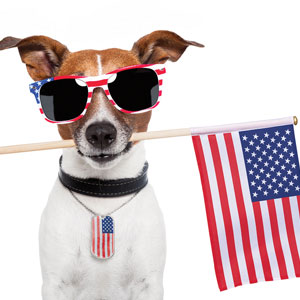 My family and I just moved from Winnipeg, Manitoba, to the suburbs of Chicago, Illinois. Most of our stuff went across the border in a big trailer, the rest came with us in a small trailer behind our minivan. It was a challenging trip for us and we learned a lot along the way. Perhaps the biggest lesson was that when you’re entering America by car and facing those stern-faced border officers, it really helps if you happen to be a dog.

The border officers were quite thorough in checking our passports and other documents, making sure we could legally enter America. As for our dog, Legacy ... well, they merely took a glance at her—just to make sure she was really a dog and not one of Osama’s cousins in a furry costume. They didn’t even check her rabies certificate or ask if she packed her bags herself.

I didn’t realize that dogs could cross the border so easily. I thought we would at least have to fill out a form, answering questions such as “What is your dog’s nationality?” “Has your dog ever been denied entry into the country?” and “What are the last three addresses that your dog did her business in?”

Letting animals into the country so easily could be a major security risk. Just imagine a bunch of monkeys being trained by the Taliban to cross the border, make their way to Washington D.C., and take over the nation’s biggest zoo. We’d see some strange headlines: “Chaos Reigns in U.S. House of Representatives,” “Experts Called in to Determine Who’s a Monkey, Who Isn’t,” and “House Passes Resolution to Increase Banana Imports.”

Getting our dog across the border was easy, but finding dog-friendly motels where we could stay was a bit of a challenge. A number of motels allow dogs to stay in rooms, but the ones we came across weren’t exactly the type of motels we’d normally stay in. Not that we were looking for a particularly fine motel, but we did have some basic needs, like smoke-free air, clean sheets, and blankets that had been aired out since the Reagan Administration.

The first dog-friendly motel we encountered fell short in a few areas. How bad was this motel? Well, here’s how bad it was: our dog refused to stay there. She took one look at the room, put her nose in the air and dashed back to our car.

Actually, she didn’t mind the room at all. It was the first time she had ever stayed in a motel and it might as well have been the Hyatt Regency, for all she knew. “What a nice smell in this room,” she probably said to herself. “And it already comes with stains on the carpet—I don’t have to make them.”

That’s the good thing about dogs. They don’t care about clean sheets or hot showers or cable TV. As long as they’ve got food and a dry spot to sleep in, they’re as happy as a teenager at the mall.

I shouldn’t complain about the motel—at least they gave us a room. Other motels weren’t so kind, especially since Legacy is a fairly big dog. They just couldn’t accommodate a dog of her size, even when I promised not to bring her to the breakfast buffet.

I wish I could have sneaked her into one of those nice rooms. Legacy is a smart dog and has learned several commands, such as “Shake hands!” and “Roll over!” but it’s going to take a few weeks for her to learn “Get into the suitcase!”