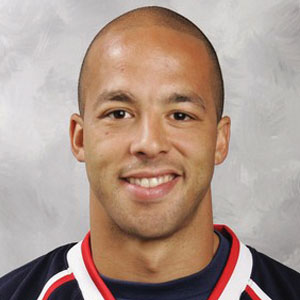 Emmanuel Noveen Malhotra, whose father, Shadi, is from Lahore, Punjab, in pre-partition India (present day Pakistan) and mother, Lise, is French-Canadian, began playing organized hockey when he was 7. As a teen, he spent two years with the Guelph Storm of the Ontario Hockey League before joining the NHL’s New York Rangers.

He is the second NHL player of South Asian origin. (The first was Robin Bawa of British Columbia, Canada, who spent parts of four seasons in the NHL in the early 1990s but was never a regular starter.)
Malhotra currently plays for the Vancouver Canucks, having signed a three-year, $7.5 million contract last July. However, his first season with the Canucks ended in injury – he was struck in the eye with a puck on March 16 and has undergone multiple surgeries, hoping to be ready for the 2011-12 season.
In September 2007, Malhotra married Joann Nash, sister of NBA star Steve Nash. The couple have a 3-year-old son, Caleb.

Both his parents hold doctorate degrees from the Université Laval in Québec City – his father a doctorate in polymer chemistry and his mother in biochemistry – and their son wasn’t a slouch in his studies either. In 1998, during his junior career, he was awarded the Bobby Smith Trophy as the Ontario Hockey League’s scholastic player of the year. “Education has always been important in my family, and balancing the rigors of junior hockey with my schoolwork was a great accomplishment,” he told India Currents in 2008.

MALHOTRA BY THE NUMBERS

“When (Indo-Canadian) kids and families come up to you and say, you know, 'we're excited you're here, we watch hockey because of your background,' it's a cool feeling to have that.” (Vancouver Sun)

“Growing up in Mississauga (Ontario), it never occurred to me that I was different. But when we went to some smaller cities for tournaments, I could hear a couple of racial slurs . . . My parents always taught me that if I reacted like them, I was no better than them." (Guelph Mercury)

“Skill-wise I wasn’t always the best, but I always had a really strong work ethic. Plus, I grew up physically faster than most kids, so I was usually bigger and stronger than my peers. Those two things helped me to excel.” (India Currents)