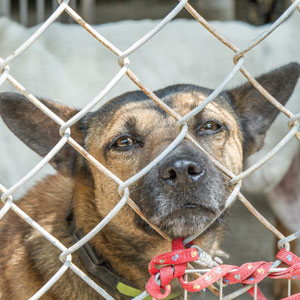 Foreigners interested in adopting from India are in luck: there are numerous potential adoptees, as long as the adoptive parent doesn't mind if the adoptee is malnourished, lives on the street, and has four legs and a tail.

Adopting an Indian child is hard, but adopting a stray dog is far easier than one might think. Indeed, the canine migration to the western world has been gathering momentum in recent years, according to an article by Purnima Sharma on the website Scroll.in. If you've taken a flight from New Delhi to Toronto, you may have already realized this when you walked through the different sections of your plane: First Class, Business Class, Economy Class, and Canine Class. That may also explain the meal that was accidentally given to you.

According to Sharma, the canine migration began about a dozen years ago when a Canadian schoolteacher named Barbara Gard visited Mussoorie and rescued a puppy from a group of schoolboys who were attempting to toss it down a cliff. She decided to take the dog, which she named Francis, back to Canada with her. (She would have done a greater service to India if she had taken those schoolboys with her, too.)

Francis thus became a trailblazer who will be remembered forever, especially if someone gets around to writing the book, The History of Desi Dogs in Canada.

Francis and other stray dogs from India are considered part of the desi breed. Desi dogs distinguish themselves from other breeds in the following ways: (1) they have a strong affinity for spicy food; (2) they have no trouble dodging traffic on busy roads; and (3) they are always late for important events.

Actually, I'm not sure what distinguishes a desi dog from other breeds, but Olivia Craven, a Canadian who adopted a dog named Inde from Delhi, told Sharma about at least one peculiar habit that her dog has. "She had these very unusual habits—like she wouldn’t drink out of a bowl but only out of a drinking glass, immersing her whole nose inside just to get the tiny bit of water left in the bottom."

A street dog that drinks water from a drinking glass but not out of a bowl is indeed unusual. Was Inde really a street dog or did she escape from the home of the British High Commissioner?

Whatever their habits, desi dogs have apparently captured the interest of many dog lovers in the Western world, some of whom are willing to spend thousands of dollars to rescue the dogs from the streets of India. These adoptions take place with help from organizations such as Desi Furries Worldwide, Adopt an Indian Desi Dog, and Go West, Young Dog.

Premlata Chaudhaury, a Delhi-based veterinarian who runs Desi Furries Worldwide, describes desi dogs as "much more intelligent and hardy than most pedigreed dogs that people spend so much money on." She'd like to see more Indians adopt desi dogs. “This is our native dog and we need to take pride in it,” she told Sharma.

Chaudhaury has helped send more than 200 dogs abroad in the last three years. The total number of dogs being adopted from India every year is unknown, but it's probably quite high—high enough that the government is undoubtedly considering a law requiring dogs to get passports. Just think of the revenue that would be generated, not just for the government but also for the photographers who take passport photos.