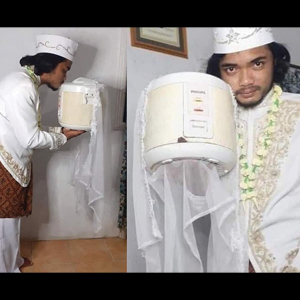 At any given moment, there are millions of people around the world who are dreaming of wedding ceremonies. They have a strong desire to dress up in wedding finery and make a lifetime commitment in front of friends and relatives.

Many of these single people are dreaming of marrying a particular person, perhaps a boyfriend or girlfriend or someone whom their parents have selected. But others do not yet have a specific person in mind: they are still searching, hoping, praying and dreaming.

Some of them are so intent on getting married, wearing a bride’s dress or groom’s suit, that they just go ahead and do it. “Why should I keep waiting for the perfect mate?” they ask themselves.

That’s what an Indonesian man named Khoirul Anam recently did. He asked himself an important question: “Who has provided me with rice for the last few years?”

After contemplating this question, he dressed up in his traditional wedding attire and got married in a private ceremony to his rice cooker.

According to news reports, Anam draped a sheer white veil on the rice cooker, giving it the appearance of a bride. He shared pictures of the wedding on social media, including one photo in which he’s kissing his bride, and another in which he’s signing the official wedding papers. He revealed his reasons for marrying the rice cooker in a caption, saying she was “fair, obedient, loving and good at cooking.”

He did not share any details about the wedding night. We can only guess that he plugged in the bride and had a steamy night.

No details about the honeymoon were revealed either. Perhaps the newlyweds took a boat ride to a nearby island. Perhaps the bride, in a romantic gesture, sat on the groom’s lap the whole time.

Unfortunately, the marriage did not last. Four days after tying the knot, Anam announced that he was divorcing his wife. His reason: she was good at cooking rice but could not cook any other dishes.

This is, of course, a common problem in marriages. One partner expects the other to change.

Anam: “What else can I do, but push your buttons and hope you cook something else?”

Cooker: “If you had wanted your wife to cook something else, you should have married an Instant Pot. But the Instant Pot isn’t fair and obedient, is it?”

It’s always sad when a marriage ends in divorce, especially when it has a big impact on statistics. As far as I know, the divorce rate in human history when a man marries a rice cooker is now 100 percent. I’m not sure, however, what the divorce rate is for all marriages involving humans and objects.

Yes, in case you are wondering, Anam is not the first human to think of marrying an object. One British woman married a duvet (a type of blanket); another Brit married a chandelier; and an American woman married an entire train station.

None of these marriages are legally binding, of course. Anam’s marriage to the rice cooker was mainly a publicity stunt, but thanks to him, perhaps fewer people will object to marrying humans.

Groom’s father: “Good news. My son has changed his mind. He will marry your daughter, Preethi, after all.”

Bride’s father: “That’s wonderful! We were praying for such an outcome. What made him change his mind?”

Groom’s father: “I told him to make a choice. I said, ‘You must either marry a nice-looking Preethi or a rice-cooking Preethi.’ He made a good choice.”

Bride’s father: “He can have both. Preethi loves her Preethi rice cooker.”

Groom’s father: “But it’s a slippery slope. How will Preethi feel if he finds a third Preethi? How many Preethis can you bring into a marriage?”