FUN TIME: IT’S SO HARD TO PUT THE CELLPHONE AWAY 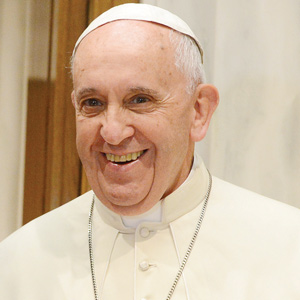 Pope Francis, the leader of the world’s 1.2 billion Roman Catholics, had a great message the other day, one that applies to all people, whether they’re Catholic or not.

No, he didn’t say that, though he did have a message about the device that people often use to access social media. Speaking to tens of thousands of people in St. Peter’s Square in Vatican City, the Pope made reference to a communion prayer: “The priest says ‘Lift up your hearts.’ He does not say, ‘Lift up your cellphones to take pictures.”

According to a Reuters report, the Pope called using cellphones (or mobiles) during Catholic Mass as “a very ugly thing.”

He elaborated on the ugliness, saying, “It makes me very sad when I celebrate (Mass) here in the piazza or in the basilica and I see so many cellphones held up. Not only by the faithful, but also by some priests and even bishops! The Mass is not a show ... so remember, no cellphones!”

The crowd broke out in laughter and applause— and some folks probably pulled out their cellphones to capture the moment.

The Reuters report notes that Pope Francis has been urging followers to be more spiritual and priests to be more humble. The Pope travels in a simple car—a blue Ford Focus—and doesn’t like to see priests drawn to flashy cars and the latest smartphones.

But let’s put humility aside for a moment. Whether you own the latest iPhone or the cheapest phone available, the Pope’s message applies to you: Don’t pull your cellphone out indiscriminately. There are many situations in which a cellphone is best kept in your pocket or handbag.

It’s easy for me to talk, of course, but much harder to put my words into practice. In the last week alone, my cellphone etiquette has twice been called into question.

The first time was when my wife and I went to my son’s elementary school for a meeting with his teacher. While we were waiting outside the classroom for the meeting to begin, I received a text message from a contractor who is remodeling part of our house. I began to type a reply, but before I could finish, the teacher appeared at the door and ushered us into the classroom. As we sat down and the teacher spoke to us, I tried to quickly finish my text message and send it. But before I could type a single word, my wife reached out, snatched the cellphone out of my hands and set it on the desk in front of us. She didn’t say anything, but the message was clear: it’s inappropriate to be using a cellphone during a meeting with your son’s teacher.

I knew it was inappropriate. I really did. But I felt an urge to finish the message I had begun—as though it would disappear if I put the cellphone back into my pocket. In the same way, many people feel the urge to send texts while they are driving. No, the red light does not mean “time to text.”

The second time I used my phone in a questionable way was during a choir concert that my children were participating in. Sitting in the audience with my wife, I set the cellphone beside me to keep track of football scores. My wife glared at me, but did not snatch the phone from me, perhaps because I made it a point to look straight ahead at the children performing in the choir. When I glanced at the phone between songs, I did so discreetly—through the corner of my eyes.

Oh, I forgot to mention this important fact: the choir concert was in a church. Good thing the Pope wasn’t around.