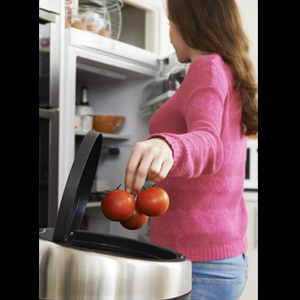 When food goes to waste in my home, I can’t help feeling a little guilty. I think about all the farmers who took the trouble to grow the food. “You idiot,” they’d say. “Do you know how much water and fertilizer it took us to grow that tomato? Instead of letting it rot in your kitchen, the least you could do is feed it to your dog.”

My dog, unfortunately, does not consider a tomato food. It doesn’t fall into any of the three food groups she recognizes: (1) meat; (2) things that contain meat; (3) things that can turn into meat.

If I put a tomato down in front of her, she’ll smell it and look at me with a puzzled expression that says, “What do you want me to do with this red ball? Don’t you know that I’m too old to play fetch?”

If I had a dog that ate everything, it would help lessen my guilt whenever I need to toss some food away. I’d just drop it in my dog’s bowl and pretend that I’m giving her a special treat.

Food wastage is seemingly unavoidable. That’s partly because genetic engineering hasn’t advanced far enough. If it had, we’d be able to buy a bunch of bananas on Sunday and have one of them ripen on Monday, another on Tuesday, a third on Wednesday, and so forth. Instead the bananas are all unripe on Sunday and overripe on Monday. By Tuesday, we’re searching for banana recipes on the Internet.

Genetic engineering could also help us produce children who don’t drop food on the floor. If you have children, especially kids younger than 5, you know that this can be a big problem. It takes a long time for children to learn about gravity and not be utterly surprised when food falls off a plate that they’re holding vertically.

Fortunately, a very smart person—probably a parent—came up with the five-second rule.

The five-second rule states that you can eat anything that falls on the floor as long as you pick it up within five seconds. If you wait longer than five seconds, bacteria will have a chance to move from the floor to the food. (Bacteria usually move very slowly, except for a rare strain of bacteria called Usainella Boltus that’s been spotted in Jamaica.)

The five-second rule is one of the most valuable rules humans have ever come up with. I don’t have exact statistics, but I estimate that in any given year, ten percent of the world’s food supply is picked up off the floor within five seconds.

The five-second rule has saved a lot of food from being wasted, but that hasn’t made it a sacred rule. A group of researchers recently published a study that challenges the five-second rule. They say that food is contaminated as soon as it falls on the floor. Picking the food up quickly does not prevent bacteria from sticking to it.

The researchers, based at Rutgers University in the U.S., also say that the transfer of bacteria is affected mostly by moisture content. A slice of bread will not gather as much bacteria as a slice of watermelon. If ice cream falls on the floor, you’d better rinse it off before you eat it.

It seems like good research, but I won’t be sharing it with my children. As long as they’re living at home with me, I expect them to continue following the five-second rule. The only time it doesn’t apply is when they drop meat on the floor.

For meat, the one-second rule applies. If they don’t pick it up within one second, the dog will eat it.