FUN TIME: MY FRIENDS KEEP INSPIRING ME ON FACEBOOK 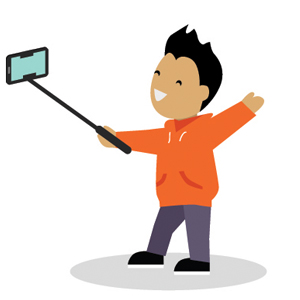 My three children have grown up in the Internet age and don’t remember what life was like before Facebook, Twitter, and other social media were created. I remember it well. I remember the days when I didn’t have to compare myself to all the people on Facebook who have achieved so much in their lives.

It isn’t enough that many of these people are ultrasuccessful in their careers, they’re also ultrasuccessful in other areas of their lives, particularly in their exercise programs. I don’t know about your Facebook friends, but some of mine are regularly running marathons, completing Ironman triathlons, and swimming across the English Channel. Meanwhile, I’m flipping through my cable lineup, looking for an English channel.

Yes, some of my Facebook friends are in superb shape. It’s a wonder that they haven’t yet competed in the Olympic Games. That’s probably because they have important responsibilities at work and their bosses won’t let them take time off to attend the Olympic trials.

You might think that my Facebook friends are just using social media to brag about their exercise routines, but I don’t think so. I know these people well, and they don’t have a boastful bone in their bodies. Nope, they’re just trying to inspire me and others.

In the middle of a marathon, when they take a selfie of themselves, they say to themselves, “If I post this on Facebook, maybe it will convince Melvin to get his butt off the couch and join me in the next marathon. Then I’ll have someone to take pictures of me from behind.”

Indeed, researchers at Brunel University in London conducted such a study and concluded that people who share their exercise routines on social media tend to be narcissists. Narcissists are people who are obsessed with themselves.

The main goal of these people is to brag about how much time they invest in their looks, according to the researchers. Status updates such as “Just completed a 10 km run through Mumbai” tend to attract many ‘likes,’ but not because people enjoy being updated about these accomplishments.

“Although our results suggest that narcissists’ bragging pays off because they receive more likes and comments to their status updates, it could be that their Facebook friends politely offer support while secretly disliking such egotistical displays,” said Dr. Tara Marshal, a psychology professor at Brunel University.

Am I annoyed by it? Well, it depends. If a friend is updating me about the marathon he just completed, I’m neither annoyed nor inspired. I know I’ll never run a marathon, so it doesn’t bother me that one of my friends is doing it. There is no voice in my head saying, “You should run a marathon, too, Melvin. You should run 26 miles and spend 26 days recovering in the hospital.”

But if a friend is updating me that he just went for a 20-minute run, then I’m a little annoyed, because I know that I could easily get myself off the couch, run for 20 minutes, and post about it on Facebook.

Yes, with a little more effort and discipline, I could be the one whom everyone believes is a narcissist.