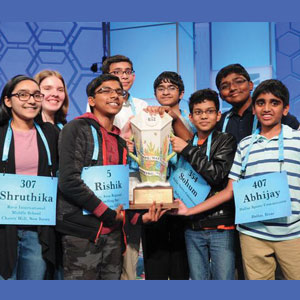 But don’t tell that to the 500-plus young spellers who made it to the National Spelling Bee finals after spending countless hours studying words from the dictionary. Many of these words are so obscure that if you stood on the street and recited them, some passers-by would wonder what strange language you were speaking while others would call the local mental institution to see if anyone was missing.

The National Spelling Bee has been held every year since 1925, and until about 30 years ago, the spellers encountered words you might actually come across while reading a newspaper. When Balu Natarajan of Chicago won the National Spelling Bee in 1985, his final word was “milieu.” These days, the championship words are in a completely different milieu than “milieu.”

Natarajan was the first of 28 Indian-American kids to be crowned national spelling champion. In fact, for the last 12 years in a row, Indian-Americans have won the spelling title. If that isn’t amazing enough, the last six National Spelling Bee contests have produced 15 Indian-American champions.

Fifteen in six years? How is that possible? Well, in 2014, Sriram J. Hathwar and Ansun Sujoe were declared co-champions after exhausting the list of words that the spelling bee organizers had prepared. The following year, Gokul Venkatachalam and Vanya Shivashankar became the second set of co-champions.

The organizers tried to make the words harder in 2016, but the spelling bee once again produced co-champions: Jairam Hathwar and Nihar Janga. They were the final two contestants and whenever one spelled a word incorrectly, so did the other. Some observers must have suspected a conspiracy: The Indian-American community was not satisfied with winning one National Spelling Bee title every year; they now wanted two.

For the next two years, the National Spelling Bee returned to form, crowning just one champion each year: Ananya Vinay in 2017 and Karthik Nemmani in 2018.

But the spelling bee gods were not happy about this. “Just two champions in two years?” they muttered. “We’ll see about this.”

After 20 rounds of spelling, the organizers crowned eight co-champions. Among them, only Erin Howard from Alabama is not Indian-American.

With each of the co-champs winning the firstplace cash prize of $50,000, the contest left more families in pure ecstasy than ever before. But if the National Spelling Bee is to survive, it can’t be handing out so much dough every year.

My suggestion is to use tie-breakers, as many sporting events do. Here are three tie-breakers that would work extremely well:

1. Find the largest dictionary in the world and ask each contestant to bench-press it. Whoever lifts it the most times is crowned champion.

2. Give the contestants five seconds to perform a difficult spelling task, such as spelling their own last names backwards.

3. Award the championship trophy to the contestant whose parents exhibit the most genuine smiles when another kid spells a word correctly.