Fun Time : THE MANY FIRSTS OF VICE PRESIDENT-ELECT KAMALA HARRIS 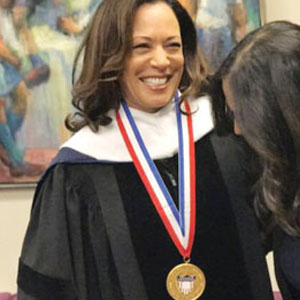 Needless to say, the American media had a little trouble keeping up with all these firsts. One TV network simplified things considerably by calling her simply the “first woman of color to be elected vice president of America.”

As a person of color myself, I was extremely pleased that a woman of color was on a presidential ticket that had beaten a man of color (slightly orange).

Another inclusive term that many people are using these days is BIPOC. It’s an acronym that stands for “Black, Indigenous and People Of Color.” Kamala Harris is not the first BIPOC vice president—that distinction belongs to Charles Curtis, a man of Native American ancestry who served under President Herbert Hoover from 1929 to 1933. But Harris, within a few years, will undoubtedly become the first BIPOC vice president in a Bollywood biopic.

Harris will also be the first HBCU graduate to become vice president. HBCUs are “historically black colleges and universities.” Harris graduated from Howard University, an HBCU in Washington, D.C., before heading to law school at University of California, where she studied the art of interrogating suspected criminals and Supreme Court nominees, sometimes at the same time.

The election of Harris to the second highest position in America means that her husband, Douglas Emhoff, has also achieved a significant first. He is about to become the first Second Gentleman of the United States. America has had numerous First Ladies and Second Ladies, but never a First or Second Gent. (To make matters worse, it has been four long years since the White House had a gentleman of any kind.)

Unlike India, which elected its first female leader more than 55 years ago, America has yet to put a woman in the top job. Hillary Clinton came close four years ago, so close that Bill Clinton was already planning his first project as a First Gent: hosting a luncheon for all the White House interns.

As vice president, Harris will be next in line to become president if Joe Biden is unable to fulfill his duties, for health reasons or otherwise. All the male chauvinists who voted for Trump in 2016 because they didn’t want to see a female president are no doubt praying hard for Biden’s health.

At 78, he is the oldest president in U.S. history, but I hope he’s able to serve two terms. After that, Harris will get a chance to run for president again. If things go well, she will move into the White House in 2029, achieving another series of firsts and touching off celebrations all over America, India, and Jamaica.